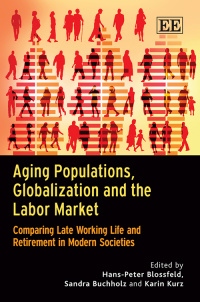 More Information
Critical Acclaim
Contributors
Contents
More Information
This topical and timely analysis of late career and retirement within nine European societies and the USA examines how social inequality structures have developed in an era of globalization and aging populations.

For several decades, many European societies relied on pushing and luring older workers out of employment by using generous early retirement programs in order to relieve national labor markets in times of globalization. However, as this book argues, one of the major challenges facing European and Northern American societies today is their severe demographic aging, which in turn places pension systems under substantial pressure due to the rising imbalance between those claiming pensions and those contributing to the pension system. Indeed, it is observed herein that in the recent past, governments have tried to increase the labor market attachment of older employees by retrenching early retirement benefits. This study investigates how these developments have impacted on the situation of older workers and retirees in nine European societies and the USA. In particular, the book looks at how social inequalities in later life have developed in the light of recent pension reforms.

This informative book will appeal to sociologists, demographers, political scientists and economists interested in many different aspects of research including: international comparative research, globalization, labor market, welfare state, social inequality and research on aging. Researchers in the field of retirement and globalization studies will also find this book helpful, as will academics in labor market research and comparative political studies.
Critical Acclaim
‘This timely and important book describes changes over time in employment at older ages, the timing of retirement, and pension income and how these changes correspond with historical demographic, economic, and policy changes. What is especially valuable is that this book gives readers insight into how these dynamics are playing out around the world in countries such as Denmark, Estonia, Germany, Hungary, Italy, the Netherlands, Spain, Sweden, the United Kingdom, and the United States.’
– Barbara Butrica, Journal of Pensions Economics and Finance

3. Late Career Instability and the Transition into Retirement of Older Workers in the Netherlands
Maurice Gesthuizen and Maarten H.J. Wolbers

5. Pathways from Work to Retirement and Old Age Inequality in Spain
Jonas Radl and Fabrizio Bernardi

6. How ‘Flexicure’ are Older Danes? The Development of Social Inequality in Later Life Since the 1980s
Julia Schilling and Mona Larsen

7. Social Inequality in the Late Career and Old Age Income between 1981 and 2007: The Case of the Swedish Welfare State
Gabriella Sjögren Lindquist

8. Late Careers in Hungary: Coping with the Transformation from a Socialist to a Market Economy
Alberto Veira-Ramos and Erzsébet Bukodi

PART III: CONCLUSIONS AND DISCUSSION
12. Comparing Late Working Life and Retirement in Europe and the US: The Development of Social Inequalities in Times of Globalization
and Aging Societies
Karin Kurz, Sandra Buchholz, Alberto Veira-Ramos, Annika Rinklake and Hans-Peter Blossfeld

Handbook on Globalisation and Labour Standards