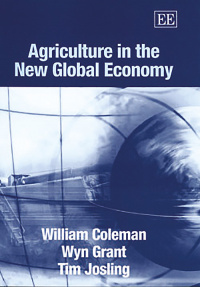 Agriculture in the New Global Economy

More Information
Critical Acclaim
Contents
More Information
Agriculture in the New Global Economy examines the extent to which the political economy of agriculture and the food chain is being transformed by globalisation.

This book highlights the important changes that have taken place in the agriculture and food system with the spread of globalisation to this traditionally local sector. Structural change and emerging technologies have contributed to this transformation, which has extended to the political environment in which agriculture operates. The authors identify four paradigms that have characterised the governance of agriculture: a traditional dependent-agriculture paradigm; a neo-liberal competitive paradigm; a multifunctional paradigm; and an emergent globalised-production paradigm. The tensions among these paradigms are developed with reference to evidence from the United States and Canada, the EU, Australia, Japan and the Global South. The book analyses the controversy over genetic modification of foodcrops, developments in agricultural trade policy at the multilateral and regional levels, changing national food policy systems, and emerging global governance arrangements for the sector.

Illustrating contemporary policy debates using both theoretical perspectives and empirical evidence, this book will appeal to academics, researchers and students specialising in political science, environmental studies, agricultural economics, management and food policy. The book will also be of interest to government practitioners in agriculture and environment departments as well as international organisations such as the EU, FAO and WTO.
Critical Acclaim
‘This is an important book for students interested in contemporary agro-food systems and rural land use. Written by two political scientists and an agricultural economist, the book pays close attention to the politics of agricultural trade. It is a welcome addition to the scholarship on global agro-food systems.’
– Krisna Suryanata, Growth & Change

‘Very illuminating, very balanced and often to the point, this book clarifies in a remarkably 'simple' manner complex (possible) developments within this often overlooked sector of fundamental importance for human survival. It will be of great value for students on a wide variety of courses as well as for researchers, administrators and policymakers. I warmly recommend it.’
– Geografiska Annaler

‘Agriculture in the New Global Economy is highly recommended to all those with an interest in international agriculture. I think it especially useful for readers who are unfamiliar with the territory and are looking for careful outlines and helpful pathways.’
– Allan Tunstall, Rural Society

‘The three authors have produced an important and well-written piece of work providing, as it were, lots of food for thought. . . Since the book is interdisciplinary and rich in empirical evidence on issues that are not well accounted for in the literature, it appeals to academics, students and practitioners dealing with globalisation, agricultural food production, trade, agricultural and environmental policies. Indeed, this book is a must read.’
– Carsten Daugbjerg, Journal of Public Policy

‘This survey is rich in detail of the role of new organizations and government ministries, and of attempts to make agriculture more like any other industry. . . this volume should be a strong impetus for complementary analytical and empirical research of the process and effects of globalization on agriculture. Recommended.’
– E.H. Tuma, Choice
Contents
Contents: Preface 1. Introduction 2. Economic Globalisation: Changing Patterns of Trade, Industry Structure and Farming 3. Technology and Political Resistance 4. The Globalisation of Ideas 5. Globalisation, Regionalisation and Trade Rules 6. A Transnational Policy Space: The Actors 7. A Transnational Policy Space: Structure References Index
Add to Wish List
eBook for individuals
978 1 78254 228 5
From $40.00
Click here for options