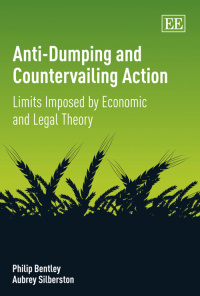 9781847203441 Edward Elgar Publishing
Philip Bentley KC, Partner, McDermott Will & Emery Stanbrook, Brussels, Belgium and the late Aubrey Silberston CBE, formerly Professor of Economics, Imperial College, London, UK
Publication Date: 2007 ISBN: 978 1 84720 344 1 Extent: 232 pp
This book, written by a lawyer and an economist both of whom have worked extensively in the field of international trade, offers a challenging and thought-provoking consideration of actions against dumping and export subsidies.

More Information
Critical Acclaim
Contents
More Information
This book, written by a lawyer and an economist both of whom have worked extensively in the field of international trade, offers a challenging and thought-provoking consideration of actions against dumping and export subsidies.

Unlike many books in the field which simply set out the relevant international agreements and discuss their interpretation by various regulatory authorities, this book identifies numerous contradictions found in existing law and practice. Many of which, the authors argue, defy economic as well as legal logic. In light of their analysis, the authors propose a number of changes to current law and practice. Whilst they are under no illusion of the likelihood that such changes will occur in the relevant agreements in the near future, it is hoped that through compelling argument they can not only contribute to future debate, but also shape the way these issues are treated in practice.

Providing a critical analysis of the commonly used trade measures against dumping and export subsidies, Anti-Dumping and Countervailing Action will be of international interest, especially to regulatory authorities, trade lawyers, trade economists and scholars and students in business school
Critical Acclaim
‘. . . a fine attempt to shed light on the legal rules that make antidumping and countervailing duty so controversial. Bentley, and experienced trade lawyer, and Silberston, a long-time professor of economics at Imperial College-London, team up to translate arcane and often incomprehensible legal rules into common sense language. Their book not a “how to” manual of how cases proceed, but rather a nontechnical review of many obscure but crucial concepts. The book’s appeal is considerably widened by their frequent discussion on whether the rules make economic sense. . . . the approach taken in the book enlightens policymakers, practitioners, and academics on the perverse nature of antidumping and countervailing duty laws. . . . a fine addition to the bookshelf of any scholar interested in studying trade agreements and administered protection.’
– Thomas J. Prusa, Journal of Economic Literature

‘Philip Bentley and Aubrey Silberston provide a balanced treatment of a complex area of trade law – taking action against dumped or subsidized exports. They document in an accessible manner the many problems associated with current rules and practice and provide a practical set of recommendations to improve the administration of trade law in these areas.’
– Bernard Hoekman, Development Research Group, The World Bank

‘Written by a lawyer and an economist, both of whom have long experience and deep knowledge equally of theory and practice, this book offers a unique, objective and dispassionate analysis of anti-dumping and countervailing action from various aspects, not only what it is and how it is applied but also its problems and ambiguities – not least in a globalised and interdependent world where it is easy to do as much damage to one’s own producers and consumers as to the apparent transgressor. Finally, some thoughts are offered as to what might be done to introduce greater rigour and discipline and to resolve the principal defects. A comprehensive guide to and review of this area of trade policy has long been needed; here it is. Trade policy practitioners, lawyers, students, and above all the negotiators should read it. Bentley and Silberston will be the standard work for some time to come.’
– Anthony Hutton, formerly Director-General for Trade Policy in the Department of Trade and Industry, London, UK

‘With their book Anti-Dumping and Countervailing Action Philip Bentley and Aubrey Silberston provide an eminent addition to the legal and economic literature on the subject of the appropriate use of anti-dumping and countervailing duties. Rather than offering a nuts and bolts how to book, the authors deliver a succinct and relatively non-technical overview of substantive concepts and problems inherent in the use of these commercial defence instruments that will appeal to experts and non-experts alike. While the book focuses on the WTO Anti-Dumping Agreement and its implementation in the EU and the United States, it offers valuable lessons for administrators and practitioners in other user countries also. One may not agree with all elements of their analysis – I, for one, would certainly not agree with their conclusion that pre-Uruguay Round zeroing made legal and economic sense – but their inter-disciplinary approach is thought-provoking and refreshing as well as timely in the middle of the EU reflection on the use of the anti-dumping instrument that EU Trade Commissioner Mandelson has launched.’
– Edwin Vermulst, partner Vermulst, Verhaeghe & Graafsma, Brussels, Belgium; editor Journal of World Trade and Global Trade and Customs Journal; author of the WTO Anti-Dumping Agreement (OUP 2006)

‘This book is an excellent study in depth of the practical problems that arise for regulatory authorities in seeking to apply the international rules, as laid down in the various WTO agreements, when requests for anti-dumping or countervailing measures have been received from industry. It offers not only an analysis of the difficult choices awaiting the practitioner but also a rigorous examination of the economic sense, if any, behind the practices that have evolved in recent years. On several occasions this sense is found to be wanting, and the authors make some thought provoking points and recommendations for change. Highly recommended for students and practitioners alike.’
– Roderick Abbott, former deputy Director General at DG Trade in the EC Commission, and later deputy DG at the WTO
Contents
Contents: Preface 1. Introduction 2. Anti-Dumping Principles 3. Anti-Subsidy and Countervailing Principles 4. Injury 5. Anti-Dumping Action – Problems Arising 6. Zeroing and the Full Degree of Dumping 7. Subsidies and Countervailing Action – Problems Arising 8. Public Policy Considerations 9. Anti-Dumping Action – Alternative Approaches 10. Conclusions and Recommendations Appendix 1. Article VI of the GATT 1947 Appendix 2. Agreement on Implementation of Article VI of GATT 1994 (AD Agreement) Appendix 3. Agreement on Subsidies and Countervailing Measures Appendix 4. List of Cases Index
Add to Wish List
eBook for individuals
978 1 84720 682 4
From $40.00
Click here for options
eBook for library purchase
978 1 84720 682 4
View sample chapter and check access on: