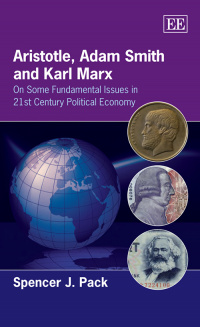 On Some Fundamental Issues in 21st Century Political Economy

‘I can thoroughly recommend this book for its interest to political econo-mists and as an example of how history of economic thought can be made clearly and easily relevant to contemporary political economists.’
– Christopher May, Political Studies

‘Spencer Pack is completely at home with the difficult works of Aristotle, Adam Smith and Karl Marx. To walk with him through their writings is to discover that they are surprisingly helpful in understanding the modern world of computers, credit crunches, religious differences, international conflicts, and unemployment due to oversaving in China and undersaving in America. One is left after reading them with growing admiration for the giants of past intellectual history. This is only one lesson that Pack teaches in this illuminating book.’
– The late Mark Blaug, formerly of the University of London and University of Buckingham, UK

‘This is an unusually ambitious and unpretentious work. And it is successful. Pack effectively compares the ideas of each of the three great men without forcing those of one upon the others. The topics are exchange value, money, capital, character, government, and change, which the author considers to be the fundamental issues in 21st century political economy. Pack is especially successful in utilizing a wide spectrum of secondary (including contemporary) sources to enrich the analysis of the expected primary sources. Student readers will be exposed to the opportunities and problems of variation in interpretation. The author has studiously avoided insinuating and privileging his own views and naively repeating well-worn and misleading, if not also erroneous, ideology-laden positions.’
– Warren J. Samuels, Michigan State University, US