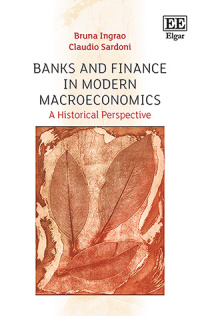 Banks and Finance in Modern Macroeconomics

9781786431523 Edward Elgar Publishing
Bruna Ingrao and Claudio Sardoni, University of Roma la Sapienza, Italy
Publication Date: 2019 ISBN: 978 1 78643 152 3 Extent: 288 pp
The world financial crisis of 2007–2008 dramatically showed the importance of credit and financial relations for the efficient working of the economy. For a long time mainstream macroeconomics ignored these aspects and concentrated only on the real sector or just took into account the most elementary picture of the financial side of the economy. This book aims at explaining why this happened through an historical excursion of 20th century mainstream macroeconomic theory.

More Information
Critical Acclaim
Contents
More Information
In this significant new book, Bruna Ingrao and Claudio Sardoni emphasize the crucial importance of considering credit/debt relations and financial markets for a comprehensive understanding of the world in which we live. The book offers both a thorough historical and theoretical reconstruction of how 20th century macroeconomics got (or did not get) to grips with the interactions between banks and financial markets, and the ‘real’ economy.

The book is split into two distinct and thematic parts to expose the different attitudes to banks and finance before and after the Great Depression of the 1930s. Part I explores the period from the turn of the 20th century to the late 1930s, when many important economists devoted great attention to banks and credit relations in their explanations of the working of market economies. Part II discusses the post-war period up until the modern day, when banks and financial markets ceased to be a major concern of mainstream macroeconomics. The 2007–8 crisis gave rise to a renewed interest in credit relations, but many problems inherited from the past still remain open. The authors stress, in particular, the implications of the uneasy, if not impossible, coexistence of the endeavour to set macroeconomics within the framework of general equilibrium theory with the attempt to develop the analysis of the monetary and financial features of actual economies.

Macroeconomists will greatly benefit from this timely book as it examines the historical evolution of the discipline, pointing out the major factors that have largely prevented the development of satisfactory analyses of the interrelations of credit, finance and the macroeconomy. Those involved in current economic policy debates will also benefit from the lessons offered in this book.
Critical Acclaim
‘I hail the book by Ingrao and Sardoni as an important and extremely brave cultural operation, since it represents not only a significant contribution to the history of macroeconomics but also an appreciable attempt to open fruitful discussion with contemporary macroeconomists on an issue that must be seen as highly relevant by both mainstream and heterodox economists.’
– Eleonora Sanfilippo, History of Economic Ideas

‘This is a very readable book into which clearly a lot of effort and passion has gone. For students or researchers looking to gain an overview of how macroeconomic frameworks have (not) incorporated finance or banking, it will be an indispensable reference.’
– Christopher A Hartwell, Review of Radical Political Economics

‘Banks and Finance in Modern Macroeconomics is a valuable study of how macroeconomics, by losing touch with its past traditions, came to be ill-prepared for the Global Financial Crisis.’
– Robert W. Dimand, Cahiers d’économie politique

‘Financial markets are terribly important in a modern economy. Yet, economists have mostly preferred to approach money from highly simplified perspectives that shunt the complexities of finance to one side. Still, from time to time, economists have tried to grasp the nettle. Ingrao and Sardoni provide a highly readable historical account of those efforts to integrate banking and finance into macroeconomic theory, which illuminates both why the problem is a difficult one and why it is important.’
– Kevin D. Hoover, Duke University, US

‘Over a decade since the 2008 financial crisis, this new book by Bruna Ingrao and Claudio Sardoni provides an in-depth historical investigation into how economists have (or have not) dealt with the relationship between economic performance and financial instability since the late 19th century. This is a much-needed contribution to the history of monetary macroeconomics, with solid analytical foundations.’
– Mauro Boianovsky, Universidad de Brasilia, Brazil

‘By historically analysing the ways in which macroeconomic theories have conceptualized the role of banks and financial markets, this book solves the puzzle of why mainstream macroeconomics puts the financial system in the background even though it has expanded enormously in its complex interaction with the real side of the economy.’
– Mario Amendola, University of Rome, Italy
Contents
Contents: PART I From the 1920s to the early postwar period 1. Introduction 2. Banks and the quantity theory: Wicksell and Fisher 3. Money and banking in the process of change: Schumpeter and Robertson 4. Banks, debt and deﬂation in the Great Depression 5. Keynes on banks in A Treatise, The General Theory and after 6. Further discussions and criticisms of Keynes’s General Theory PART II From the Neoclassical Synthesis to New Keynesian Economics 7. Finance in macroeconomics in the post-war years: The neoclassical synthesis 8. The Monetarist counter-revolution: from the ‘resuscitation’ to the disappearance of money 9. Credit and ﬁnance in today mainstream 10. Conclusions Index
Add to Wish List
eBook for individuals
978 1 78643 153 0
From $37.60
Click here for options
eBook for library purchase
978 1 78643 153 0
View sample chapter and check access on: