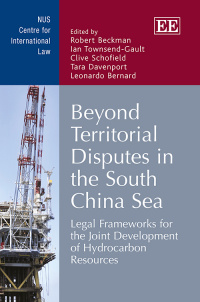 Beyond Territorial Disputes in the South China Sea

Legal Frameworks for the Joint Development of Hydrocarbon Resources

‘The book has been written by many highly qualified observers and academicians that have spent a lot of time observing and analyzing the recent developments in the South China Sea, particularly those relating to the dispute and way of overcoming them. I do hope that this publication will throw some light on such important matters and indicate possible roads to follow in solving the territorial disputes through joint development concept.’
– Hasjim Djalal, Director of Southeast Asian Studies, Jakarta, Indonesia

8. Joint Development Arrangements in Northeast Asia and the Gulf of Tonkin
Vasco Becker-Weinberg