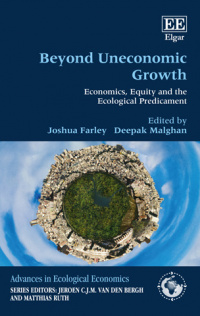 Economics, Equity and the Ecological Predicament

9781783472482 Edward Elgar Publishing
Advances in Ecological Economics series
Edited by Joshua Farley, Professor, Community Development and Applied Economics, Gund Institute for Environment, University of Vermont, US and Deepak Malghan, Assistant Professor, Indian Institute of Management Bangalore, India
Publication Date: 2016 ISBN: 978 1 78347 248 2 Extent: 384 pp
This engaging book brings together leading ecological economists to collectively present a definitive case for looking beyond economic growth as the sole panacea for the world’s ecological predicament. Grounded in physics, ecology, and the science of human behavior, contributors show how economic growth itself has become “uneconomic” and adds to a ravaging of both social and ecological cohesion.

More Information
Critical Acclaim
Contributors
Contents
More Information
This engaging book brings together leading ecological economists to collectively present a definitive case for looking beyond economic growth as the sole panacea for the world’s ecological predicament. Grounded in physics, ecology, and the science of human behavior, contributors show how economic growth itself has become “uneconomic” and adds to a ravaging of both social and ecological cohesion.

Critical Acclaim
‘Daly's contributions to the still emergent field of ecological economics are constant references for our peers throughout the developing world as well as in the North. His courageous tilting at the windmills of mainstream economic nonsense inspire us to continue questioning: in whose interests do we continue on a perpetual search for unlimited material satisfaction? Daly's conception is not only of a world restricted by biophysical limits, but also one in which poverty and deprivation are commonplace, and where Sisyphean efforts to maintain accelerated economic growth only exacerbate inequitable distribution. His vision of sustainable economic welfare shed light on other aspects of our existence which make it worth living. Thanks to Farley, Rees, El Serafy, Goodland and other fellow travelers, we are bestowed with an excellent collection synthesizing Daly's contributions to our work, which will inspire our youth and their children long after we too depart.’
– Peter H. May, President, Brazilian Society for Ecological Economics (ECOECO)