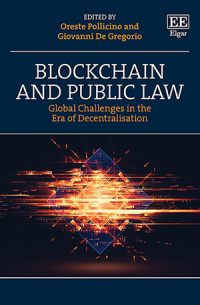 Global Challenges in the Era of Decentralisation

9781839100789 Edward Elgar Publishing
Edited by Oreste Pollicino, Full Professor of Constitutional Law, Bocconi University, Italy, Member of the Sounding Board on Disinformation, Expert for the Global Partnership on Artificial Intelligence (GPAI), and Member of the Board of the European Union Fundamental Rights Agency (FRA), Giovanni De Gregorio, Postdoctoral Researcher in the Programme in Comparative Media Law and Policy, Centre for Socio-Legal Studies, University of Oxford, UK
Publication Date: 2021 ISBN: 978 1 83910 078 9 Extent: 256 pp
This important and topical book provides a comprehensive overview of the challenges raised by blockchain from the perspective of public law. It considers the ways in which traditional categories of public law such as sovereignty, citizenship and territory are shaped, as well as the impact of blockchain technology on fundamental rights and democratic values.

More Information
Critical Acclaim
Contributors
Contents
More Information
This important and topical book provides a comprehensive overview of the challenges raised by blockchain from the perspective of public law. It considers the ways in which traditional categories of public law such as sovereignty, citizenship and territory are shaped, as well as the impact of blockchain technology on fundamental rights and democratic values.

Articulated in two sections, the first analyses the opportunities and the challenges that blockchain and distributed ledger technologies raise in the field of public and constitutional law, while the second highlights challenges derived from the intersection between blockchain and other legal fields such as contract law, financial law and antitrust law. A wide variety of expert contributions offer further examinations of the constitutional challenges of blockchain technologies that provide regulatory options for governments and lawmakers.

Blockchain and Public Law will be a critical point of reference for scholars and students of legal theory, public policy and governmental law. It will also be beneficial to legal practitioners and lawmakers to further develop their knowledge of the field of blockchain at national and international levels.
Critical Acclaim
‘The broader variety of perspectives in the book make an important contribution to current scholarly debates. Hopefully this research will also be noticed by policymakers presented with opportunities (or pressures) to adopt blockchain technologies.’
– Albert Sanchez-Graells, How to Crack a Nut: A blog on EU economic law

‘This book is a comprehensive yet extensive study on how blockchain changes our relationship with existing public institutions.’
– Thibault Schrepel, Utrecht University, the Netherlands

‘This book cuts through the blockchain hype by compiling the research of prominent scholars that critically engage with the technology and its legal implications. It is a rich collection of lucid evaluations of blockchain and the law and an invaluable resource for anyone interested in this particular technology but also the intersection between law and technological innovation more generally.’
– Michèle Finck, Max Planck Institute for Innovation and Competition, Germany
Contributors
Contributors: F. Annunziata, T.W. Bell, R. de Caria, G. De Gregorio, P. de Hert, J. Goosens, O.J. Gstrein, Y. Hermstrüwer, A. Kharmalov, D. Kochenov, U. Kohl, A. Kumar, M.T. Maggiolino, I. Motsi-Omoijiade, F.P. Patti, O. Pollicino, P. Sirena, L. Zoboli

The Sources of WTO Law and their Interpretation