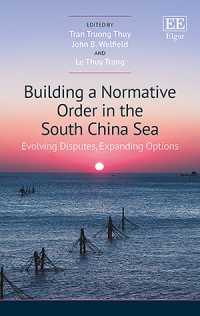 Building a Normative Order in the South China Sea

9781786437525 Edward Elgar Publishing
Edited by Tran Truong Thuy, Foundation for East Sea Studies and Bien Dong Institute for Maritime Studies, Diplomatic Academy of Vietnam, John B. Welfield, Diplomatic Academy of Vietnam and International University of Japan and Le Thuy Trang, Bien Dong Institute for Maritime Studies, Diplomatic Academy of Vietnam
Publication Date: 2019 ISBN: 978 1 78643 752 5 Extent: 304 pp
The South China Sea, where a number of great powers and regional players contend for influence, has emerged as one of the most potentially explosive regions in the world today. What can be done to reduce the possibility of conflict, solve the outstanding territorial problems, and harness the potential of the sea to promote regional development, environmental sustainability and security? This book, with contributions from leading authorities in China, the Philippines, Vietnam, Australia, Singapore and the United States, seeks to illuminate these questions.

More Information
Critical Acclaim
Contributors
Contents
More Information
With a key geostrategic location and valuable maritime resources, the South China Sea has become the epicentre of several ongoing territorial and maritime disputes. This book assesses what can be done to avert the possibility of outright conflict, and to fully harness the Sea’s potential for the security of the region and the world at large.

An original collection of insightful contributions by leading international authorities and the next influential generation of scholars, these chapters explore the latest diplomatic developments through in-depth analyses on issues affecting East Asian security. The book includes a wide range of views on the topic, covering security, legal and environmental problems, while crucially highlighting the complexity of current tensions. It offers a timely and thorough look into the region, offering potential pathways to improve the security in and around this troubled sea.

Academics, students and policymakers engaged in issues related to the law and politics of the sea, as well as specialists in Asian studies and international relations more generally, will benefit from the insight into the intricate diplomatic and security environment of the South China Sea.

Critical Acclaim
‘An excellent collection of work by an A-list of South China Sea experts. It cuts through myth and misunderstanding about the disputes over territory and resources with rigour. Well-written contributions from a wide range of viewpoints lay out the problems and routes towards their possible solutions with great clarity.’
– Bill Hayton, Chatham House, Royal Institute of International Affairs, UK

‘This book contains a comprehensive analysis of the Law of the Sea for building a maritime order in the South China Sea, written by international experts on maritime affairs. I recommend this book to those who are interested in the matter.’
– Hasjim Djalal, National University of Singapore

PART I. THE SOUTH CHINA SEA: GEOECONOMIC AND GEOPOLITICAL DRIVERS OF A CHANGING SEASCAPE
1. Getting beyond slow boil in the South China Sea
Andrew Scobell

PART III. TOWARD A COOPERATIVE MANAGEMENT FRAMEWORK IN THE SOUTH CHINA SEA
10. A regional ocean governance framework for the integrated management of the environment and biological resources in the South China Sea
Vu Thanh Ca