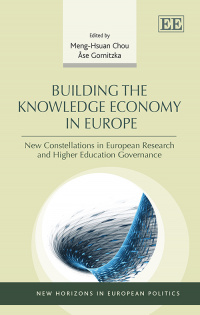 Building the Knowledge Economy in Europe

9781782545286 Edward Elgar Publishing
New Horizons in European Politics series
Edited by Meng-Hsuan Chou, NTU, Singapore and Åse Gornitzka, University of Oslo, Norway
Publication Date: 2014 ISBN: 978 1 78254 528 6 Extent: 264 pp
Building the Knowledge Economy in Europe investigates the integration of emerging knowledge policy domains on the European political agenda, and the dynamics of this in relation to knowledge policies. Professors Meng-Hsuan Chou and åse Gornitzka bring together leading experts who address the two central pillars of the ‘Europe of Knowledge’, research and higher education, to reveal the vertical, horizontal and sequential tensions in European knowledge governance

More Information
Critical Acclaim
Contributors
Contents
More Information
Building the Knowledge Economy in Europe investigates the dynamics of emerging knowledge policy domains on the European political agenda, and the dynamics of this in relation to knowledge policies. This volume brings together leading experts who address the two central pillars of the ‘Europe of Knowledge’, research and higher education, to reveal the vertical, horizontal and sequential tensions in European knowledge governance

This book is the first comparative volume on European research and higher education policies. The chapters cover topics such as the idea of the European Research Area, sustainability of the Bologna Process, institution building for a Europe of Knowledge, domestic impact of EU level initiatives, and the role of the crisis in the European Higher Education Area. It accounts for the creation of key institutions administering EU funding and addresses the core issues of European integration in the knowledge domains.

This thought provoking book will engage academic readers interested in European integration analysed from general political science, administrative science, organization theory perspectives as well as in higher education and science studies. National policy-makers, European policy-makers and practitioners will also find much policy-relevant content, particularly because the European Research Area is formally scheduled to be completed by 2014.
Critical Acclaim
‘At last! Here is a research rich and conceptually coherent account of two interlinked policy domains that have scarcely featured in either the Europeanisation or higher education literature. Such a book is needed. During the last decade, a European Higher Education Area has emerged and EU higher education and research are now strategic issues for EU growth and innovation policies. The book offers a convincing demonstration of why policy evolves in different ways, even in related policy areas. The eight case studies, written by established scholars and rising academic stars, point up the clash of institutionally embedded tensions in EU policy-making. These tensions are sector-specific. But, thanks to the comparative nature of the study, we can also appreciate a historical dimension to tensions of governance. This explains why in some cases European integration is accepted, in others treated with suspicion. This is a breakthrough book and as such is warmly recommended for both European studies and higher education studies teachers, researchers and students.’
– Anne Corbett author of Universities and the Europe of Knowledge: Ideas, Institutions and Policy Entrepreneurship in European Union Higher Education Policy and former Visiting Fellow, European Institute, London School of Economics and Political Science, UK

‘This rich text is highly recommended as it adds significantly to our understanding of European knowledge policy and the institutions by which that policy is governed.’
– Journal of Contemporary European Research

1. Building a European Knowledge Area: An Introduction to the Dynamics of Policy Domains on the Rise
Meng-Hsuan Chou and Åse Gornitzka

2. The Evolution of the European Research Area as an Idea in European Integration
Meng-Hsuan Chou

3. Translating the ‘European Charter for Researchers and the Code of Conduct for the Recruitment of Researchers’ in National Arenas: Norway vs. Spain
Meng-Hsuan Chou and José Real-Dato

4. Dynamics of Institution Building in the Europe of Knowledge: The Birth of the European Research Council
Åse Gornitzka and Julia Metz

6. Dynamics of Voluntary Coordination: Actors and Networks in the Bologna Process
Mari Elken and Martina Vukasovic

7. How Strong are the EU’s Soft Modes of Governance? The Use of the Open Method of Coordination in National Policymaking in the Knowledge Policy Domain
Åse Gornitzka

9. Economic Shocks, Federalism and Redistribution: Exploring the Future of Europe through a Comparison of the Evolution of Student Financial Aid in
the United States and the European Union
Cecile Hoareau

Handbook of Research on Artificial Intelligence in Human Resource Management