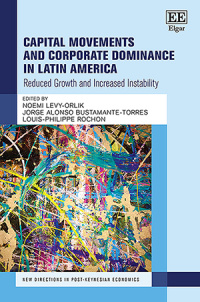 More Information
Critical Acclaim
Contributors
Contents
More Information
This book addresses the problems of Latin America, through two of the most important features of the post-Bretton Woods economic order, large corporations and weak financial markets. In turn, it shows that their impact on economic growth and development is feeble and short-lived. This resulted in income concentration and an extremely unequal distribution of wealth in the region.

This economic order was a failure, as it was unable to achieve development in Latin America; large capital corporations either re-primarized their productive activity or developed an organization based on assembly manufacture, and, as such, financial markets remained underdeveloped because large corporations did not operate through domestic financial markets.

In this book, the effects of these trends are analyzed in regional and country studies, while the impact of the 2008 Great Financial Crisis on Latin American economies are also considered.

Researchers and students, especially those interested in a Post-Keynesian or heterodox view of the region, will find these studies illuminating.

Critical Acclaim
‘Cross-border capital movements and the operations of corporations have major effects on the economic and social paths of developing and emerging economies. This wide-ranging collection of insightful essays brings us knowledge and understanding of the many important dimensions by which globalised financialisation has dominated Latin American economies.’
– Malcolm Sawyer, Emeritus Professor of Economics, University of Leeds, UK