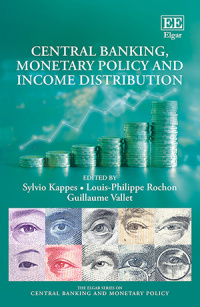 More Information
Critical Acclaim
Contributors
Contents
More Information
Part of The Elgar Series on Central Banking and Monetary Policy, this book explores the relationship between central banking, monetary policy and income distribution. The usual central bank mandate – that of exclusively fighting inflation – is being increasingly questioned by policymakers and academics. Many countries are finding that there is a need for broader mandates that will have an impact on economic activity, unemployment and other economic issues.

The chapters present a multitude of theoretical views on this topic, from classical and Marxist views to mainstream and post-Keynesian approaches. They consider the democratic aspects of central banking, critically assess the distributional outcomes of inflation targeting regimes and explore policymaking implications.

Policy makers, academics and the financial press will appreciate the relevance of the material and state of the art discussions featured in Central Banking, Monetary Policy and Income Distribution.
Critical Acclaim
‘Inequality in the distributions of income and wealth continues to rise. Meanwhile, since the global financial crisis, central bankers have become aware that in a monetary-production economy, there’s more to life than “fine tuning” an economy with reference to an inflation target. The time is therefore ripe for reinvigoration of research into the links between monetary policy and distribution. And with its clear focus throughout on the interest rate–income distribution nexus, this book delivers.’
– Mark Setterfield, New School for Social Research, US

‘This book is a very welcome addition to the literature on central banking. Behind all the talk about “inflation targeting”, “dual mandates”, and so forth, it is obvious that monetary policy directly affects income distribution. Maybe this is what it has been about all along? The Editors have invited an impressive list of well-known and emerging scholars who explore the link between monetary policy and income and wealth inequalities in the best tradition of Keynes and post-Keynesian economics.’
– John Smithin, York University, Canada.

‘This book blazes new terrain on the role of monetary policy by focusing on its impact on income inequality.’
– Steven Pressman, Monmouth University, US

PART I THEORY
1 A primer on monetary policy and its effect on income
distribution: a heterodox perspective 20
Louis-Philippe Rochon and Mario Seccareccia
2 Monetary policy and functional income distribution:
a Marxist view 35
Marcelo Milan
3 Savings glut, secular stagnation, demographic reversal,
and inequality: beyond conventional explanations of lower
interest rates 57
Matías Vernengo
4 The evolution of monetary institutions and of the theory
of money: the value of a monetary theory of production
and distribution 81
Michel Betancourt, Santiago Capraro, Carlo Panico and
Luis Daniel Torres-González
5 Monetary policy and the distribution of income in
a transfer theory of debt 114
Jan Toporowski