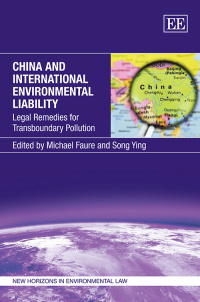 9781847207524 Edward Elgar Publishing
New Horizons in Environmental and Energy Law series
Edited by Michael Faure, Professor, Maastricht University and Erasmus School of Law, the Netherlands and Chairman of the Flemish High Council of Environmental Enforcement (VHRM), Brussels, Belgium and Song Ying, Professor of International Law, Peking University, P.R. China
Publication Date: December 2008 ISBN: 978 1 84720 752 4 Extent: 384 pp
This book considers the ways in which transboundary environmental pollution can be remedied through a variety of legal instruments. Particular attention is paid to the pollution of the Songhua river in China, but legal remedies to transboundary pollution are also discussed in a broader context.

More Information
Critical Acclaim
Contributors
Contents
More Information
This book considers the ways in which transboundary environmental pollution can be remedied through a variety of legal instruments. Particular attention is paid to the pollution of the Songhua river in China, but legal remedies to transboundary pollution are also discussed in a broader context.

Not only is transboundary pollution discussed from the perspective of international law, but also from that of the application of national law to transboundary pollution, thus centering on private law, administrative law and criminal law. As such, this book will be of great interest to academics, practitioners and students.
Critical Acclaim
‘Few countries are likely to have a more important global environmental role in coming years than the People’s Republic of China. Professors Faure and Song have prepared a remarkable collection of essays that provide valuable insight on one key aspect: China’s engagement with issues of liability for environmental damage at the domestic and international levels. There is much to be learnt from the pages of this commendable, rich and accessible work.’
– Philippe Sands QC, University College London and Matrix Chambers, UK
Contributors
Contributors: G. Betlem, M. Faure, H. Gou, J. Harrison, C. Huang, J. Jacobs, D. Li, J.-h. Li, A. Nollkaemper, M. Peeters, T. Richter, Y. Song, C. Wang, H. Wang, J. Wang, H. Yan, W.-x. Yu
Contents
Contents:

5. ILC Proposal on the Role of Origin State in Transboundary Damage
Gou Haibo

7. The Joint Governance of Transboundary River Basins: Some Observations on the Role of Law
Marjan Peeters

11. Pondering Over the Incident of Songhua River Pollution from the Perspective of Environmental Law
Wang Canfa, Yu Wen-xuan, Li Dan and Li Jun-hong

Green Deals in the Making