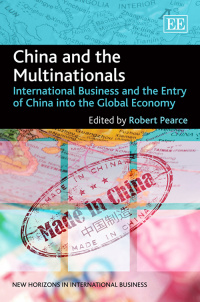 China and the Multinationals

International Business and the Entry of China into the Global Economy

More Information
Contributors
Contents
More Information
This original and important book explores how the interaction between China and multinational enterprises (MNEs) has the potential to affect the future of the Chinese economy, the global economy, and international business.

It examines the interaction of two of the most important forces affecting the development of the global economy in recent decades – firstly the opening and massive growth of the Chinese economy, and secondly the rise in foreign direct investment per se and the consequent strategic restructuring of major MNEs. The expert contributors begin by investigating precisely how leading MNEs, with well-honed international practices and commitments, have drawn their subsidiaries in China into their established networks. They suggest that MNEs’ operations are increasingly embedded in the growth and sustainability of the Chinese economy itself, rather than merely serving as a supply base for their global markets. The second part of the book examines the emergence of new MNEs from China itself. It shows how these MNEs are seen as integral to China’s development, and how their ability to expand reflects strengths from China’s growth as well as revealing the growing needs required for sustainability.

1. China and the Multinationals
Robert Pearce

2. The Opening of China and the Strategic Expansion of Multinationals: An Analysis of Subsidiary Motivation and Roles
Si Zhang and Robert Pearce

3. Multinationals’ R&D in China and its Implications for China’s National System of Innovation
Si Zhang

4. The Growth and Strategic Orientation of Multinationals’ R&D in China
Feng Zhang and Robert Pearce

5. Capability Development of Foreign-Owned Subsidiaries in China During their Early Evolution
Feng Zhang

6. Corporate Hybrids and the Co-evolution of Institutions and Enterprise in China
Simon Collinson and Yanxue Sun

8. The Political Economy of Infrastructure Multinationals: The Case of Chinese Investment in Africa
Yuxuan Tang and Robert Pearce

Experiential Exercises in the Classroom

A Research Agenda for International Business and Management