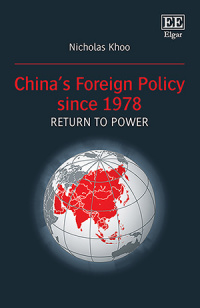 Critical Acclaim
‘China’s Foreign Policy since 1978: Return to Power is a necessity for the academic library and a must-read for all students and academicians interested in China’s foreign affairs.’
– Irieda Hamzaj, Insight Turkey

‘Nicholas Khoo employs deep knowledge and keen insight in this masterful assessment of China’s post-Cold War rise in Asia to stake out a persuasive neorealist argument viewing China’s behavior as based fundamentally on state interests and relative power. With extensive research in Chinese and foreign sources, this clear and informative analysis lays down an important marker in the ongoing debate on how the world should view China’s rise.’
– Robert Sutter, The George Washington University, US