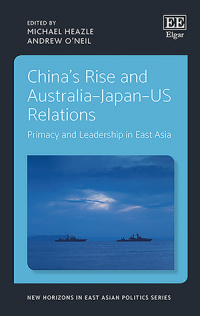 Primacy and Leadership in East Asia

9781788110921 Edward Elgar Publishing
New Horizons in East Asian Politics series
Edited by Michael Heazle and Andrew O’Neil, Griffith Asia Institute and School of Government and International Relations, Griffith University, Australia
Publication Date: 2018 ISBN: 978 1 78811 092 1 Extent: 296 pp
One of the most pressing policy challenges for Australia and Japan today is ensuring that China’s rise does not threaten the stability of the Asia-Pacific, while also avoiding triggering conflict with their largest trading partner. This book examines how Australian and Japanese perceptions of US primacy shape their respective views of the Asia-Pacific regional order, the robustness of Asia’s alliance system, and the future of Australia-Japan security cooperation.

More Information
Critical Acclaim
Contributors
Contents
More Information
The future of American leadership in the Asia-Pacific under the Trump administration appears uncertain. In this timely book, Michael Heazle and Andrew O’Neil have brought together contributors from across the globe to explore the commitment of Australia and Japan to US leadership in this region, and how this commitment may impact on often tense relations between China and the US.

China's Rise and Australia–Japan–US Relations discusses the post-war strategic presence of American leadership in Asia, and examines the influence on the region’s geopolitics. This book allows readers to understand how and why China is challenging this external engagement, and conversely why Australia and Japan want to maintain a commitment to US input; their perceptions of American leadership are critical indicators of the prospects for change in the region.

This is a vital book for security and international relations scholars, researchers and experts as it provides detailed analyses of current relations between countries in the Asia-Pacific and the US and important insights into what the future may hold in terms of US commitment in the region.

Critical Acclaim
‘This is a much needed and serious analysis of the stabilising role of the United States in the Asia Pacific region. That role in maintaining the regional balance of power is as important now as it has ever been. Australia’s place as one of America’s key allies in the region is an important piece of the jigsaw of regional architecture and it needs to continue to play that part with confidence and certainty. Above all, Australia needs to make its role clear and unequivocal and not be deflected by arguments that it should downgrade its part in upholding the US presence in the region.’
– Alexander Downer, AC, Australian High Commissioner to the United Kingdom and formerly Foreign Minister of Australia from 1996 to 2007

‘In the midst of growing uncertainty about US primacy and commitment in the Asia-Pacific, this timely volume assembles an impressive collection of prominent Australian, Japanese, and US experts to focus on how two of America’s very most important allies are grappling with the emergent regional order. With rich scholarly analysis and policy insights, the authors rightly foresee the need for Canberra and Tokyo to recalibrate their expectations about the United States, while still doing all they can with Washington and other key partners to shoulder the burden of preserving the rules-based security and economic order which has so greatly benefitted the region. Policymakers and scholars alike—in Australia, Japan and beyond—should read this book to understand how US allies are looking to navigate between a rising China on the one hand and uncertain America leadership on the other.’
– Bates Gill, Macquarie University, Australia

‘This book addresses many of the critical issues confronting contemporary international relations in the Asia–Pacific, including the origins, nature, and development of the region’s US led “rule-based” order; the future of the hub and spokes alliance system; and in particular the growing importance of “spoke to spoke” security cooperation between Japan and Australia and other US partners at a time of growing uncertainty over Washington’s regional engagement. I strongly recommended this book to anyone interested in not only better understanding Australia–Japan–US relations, but also the Asia–Pacific security order and its future.’
– Tomohiko Satake, National Institute for Defense Studies, Japan

Part I US Leadership in a Liberal East Asian Order
1. A Question of Primacy? Japan, Australia, and the Future of the United States in Asia
Michael Heazle and Andrew O’Neil

2. Resolving Contradictions: US Primacy and the ‘Rules-Based’ Order
Ian Hall and Michael Heazle

Part II US leadership and Strategic Engagement in East Asia: Directions and Challenges
3. What Does America Seek in Asia? Refuting the Pacific Primacy Myth
Van Jackson

4. Networked Security in a Changing Asia: The Value of Alliances in Uncertainty
Mira Rapp-Hooper

8. Contesting Visions of ‘Primacy’: The Australian Perception of US Decline in the Asia-Pacific
Sheryn Lee