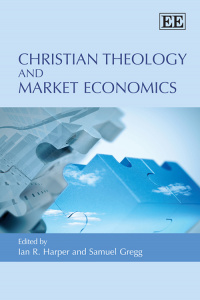 9781847203779 Edward Elgar Publishing
Edited by Ian R. Harper, Partner, Deloitte, Melbourne, Australia and Samuel Gregg, Director of Research, Acton Institute, US
Publication Date: 2008 ISBN: 978 1 84720 377 9 Extent: 240 pp
This unique work has a historical time-span reaching from Aristotle to the modern day, thus appealing to those interested in the history of ideas and economic thought as well as the links between theological and economic thought.

More Information
Critical Acclaim
Contributors
Contents
More Information
There was a time when theologians and economists knew much more about each other’s work than they do today. This book is dedicated to reconnecting two disciplines that study different dimensions of the human condition. The well respected contributors – economists, theologians, some both – explore the interaction of Christian theology and market economics, from the earliest times to the modern day. There is much to surprise, puzzle and edify serious students of theology and economics as well as the merely curious.

This unique work has a historical time-span reaching from Aristotle to the modern day, thus appealing to those interested in the history of ideas and economic thought as well as the links between theological and economic thought. Economists studying the intellectual roots of their discipline, as well as Christians researching the links between Christian beliefs and the worldly philosophy governing everyday commercial lives will also welcome it.
Critical Acclaim
‘. . . the volume provides a number of strong essays that can help economists and others understand the intricate relationship that economics has historically had to theology and Christian religion.’
– Daniel K. Finn, History of Economic Ideas

‘This book is a significant contribution to Christian discussion of economics.’
– Gordon Preece, Zadok Perspectives

‘Theologians wanting to start the journey about what it means to think Christianly about economic issues will find this text a useful introduction. Protestants, unfamiliar with Catholic teaching on economics, will benefit from the mature reflection exhibited by the Catholic Church’s long ecclesiastical memory. The authors deftly avoid controversies that presently divide Christians into difference communions. . . the authors are to be commended for their lucid call for theologians to engage in the complex world of money and markets.’
– Stephen M. Vantassel, Journal of Markets & Morality

‘Christian Theology and Market Economics is a welcome and important contribution to the dialogue between serious Christian thinking and market economics.’
– Bishop Robert Forsyth, Policy

‘Theologians and economists are both enormously influential. Unfortunately, they tend to misunderstand, ignore, talk past, and distrust one another. Harper and Gregg aim to solve this problem by “demonstrating that meaningful conversation between the disciplines is both possible and rewarding.” They are too humble. The ten essays in this collection show that this conversation is immensely rewarding. . . Highly recommended.’
– R.M. Whaples, Choice
Contributors
Contributors: P. Booth, G. Brennan, R.F. Crespo, S.J. Grabill, S. Gregg, I.R. Harper, P.S. Heslam, E.L. Jones, G. Menzies, M.J. Miller, P. Oslington, A.M.C. Waterman
Contents
Contents:

PART I: CHRISTIANITY AND THE HISTORY OF ECONOMIC THOUGHT
1. Aristotle’s Science of Economics
Ricardo F. Crespo

8. Modern Business and its Moral and Ethical Dilemmas in a Globalized World
Philip Booth

10. The Role of Business in the Fight Against Poverty
Peter S. Heslam