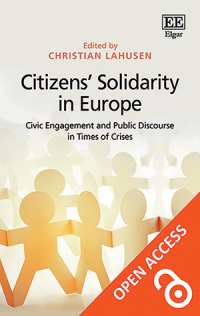 Civic Engagement and Public Discourse in Times of Crises

9781789909494 Edward Elgar Publishing
Edited by Christian Lahusen, Professor of Sociology, Department of Social Sciences, University of Siegen, Germany
Publication Date: 2020 ISBN: 978 1 78990 949 4 Extent: 208 pp
This is an open access title available under the terms of a CC BY-NC-ND 4.0 License. It is free to read, download and share on Elgaronline.com.

Citizens’ Solidarity in Europe systematically dissects the manifestations of solidarity buried beneath the official policies and measures of public authority in Europe. In this exciting and innovative book, contributors offer comprehensive and original data and highlight the detrimental factors that tend to inhibit or annihilate solidarity, and those that are beneficial for the nurturing of solidarity.

This critical book provides a comparative analysis of eight European countries, illustrating the scale of support for cross-national solidarity from both individuals and civic organizations. Contributors offer comprehensive and original data, analysing opinion polls, organizational fields and media
content, to unpack the thoughts, opinions and attitudes of civil society. Chapters highlight the detrimental factors that tend to inhibit or annihilate solidarity, and those that are beneficial for the nurturing of solidarity.

Offering innovative ideas and fresh data, this book will be crucial reading for researchers and students of sociology and political science, particularly those focused on European and comparative studies. Journalists, NGOs, public authorities and politicians will also benefit from its unique insight into public opinion.
Critical Acclaim
‘Solidarity is a neglected theme in political theory. It is also a crucial concern for Europe, where it is the necessary but often strained complement to economic integration. This valuable collection shows the importance of civil society organizations and also of law and the actions of ordinary citizens. It points to ways in which Europe can lead the world.’
– Craig Calhoun, Arizona State University, US

‘This impressive book comes just in time. Solidarity is under pressure everywhere in Europe, not only from the far right, also from mainstream politics, the neoliberal media-elites and the European Court, that meanwhile restricts the right to move to the good and hard working citizen. However, European citizens see that differently. In their majority they understand solidarity as political and social equality between European citizens, regions and states, and they are prepared to pay for the common wealth of all of us. Moreover, as in the founding documents of modern democracy the citizens of Europe know that European solidarity has also cosmopolitan implications. This book gives courage to make ever more public use of our own reason, that only through public use becomes an irresistible force of solidarity.’
– Hauke Brunkhorst, the European-University Flensburg, Germany.