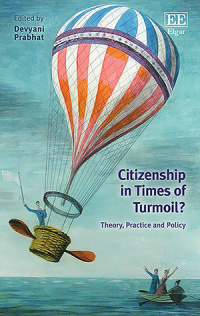 Citizenship in Times of Turmoil?

9781788119207 Edward Elgar Publishing
Edited by Devyani Prabhat, Reader in Law, University of Bristol, UK
Publication Date: 2019 ISBN: 978 1 78811 920 7 Extent: 256 pp
This innovative book considers the evolution of the contemporary issues surrounding British citizenship, integrating the social aspects and ideas of identity and belonging alongside the legal elements. With contributions from renowned lawyers and academics, it challenges the view that there are immutable values and enduring rights associated with citizenship status.

More Information
Critical Acclaim
Contributors
Contents
More Information
This innovative book considers the evolution of the contemporary issues surrounding British citizenship, integrating the social aspects and ideas of identity and belonging alongside its legal elements. With contributions from renowned lawyers and academics, it challenges the view that there are immutable values and enduring rights associated with citizenship status.

The book is organised into three thematic parts. Expert contributors trace the life cycle of the citizenship process, focusing on becoming a British citizen, retaining this citizenship with its associated rights, and the potential loss of citizenship owing to immigration controls. Through a critical examination of the concepts and content of British citizenship, the premise that citizenship retracts from full membership in society in times of turmoil is questioned.

Wide-ranging and interdisciplinary, Citizenship in Times of Turmoil? will be a key resource for scholars and students working within the fields of migration, citizenship and immigration law. Including details of legal practice, it will also be of benefit to practitioners.

Critical Acclaim
‘Citizenship In Times Of Turmoil?: Theory, Practice and Policy, edited by Devyani Prabhat, offers an extensive survey of the legal and social issues linked to citizenship in the United Kingdom, examining citizenship acquisition and loss along with immigration control. What the book offers is, on the one hand, a series of focused analyses on the major issues linked to UK citizenship law. On the other, as the cases include the transmission, acquisition and loss of citizenship, as well as the different relations between citizenship and immigration law, the book works well as a comprehensive exploration of contemporary UK citizenship.’
– Djordje Sredanovic, The Statelessness & Citizenship Review

‘Devyani Prabhat has assembled an excellent team of scholars across academic disciplines and legal specialisations. The chapters provide comprehensive and expert analysis on contemporary issues of British citizenship, ranging from the shifting categories of exclusion and inclusion in nationality law, naturalisation policy and integration tests to Brexit, “the hostile environment” and the Windrush scandal. The book is unique in combining the theory, practices and policies of British citizenship.’
– Dora Kostakopoulou, Warwick University, UK

‘This work offers a state of the art treatment of the law and policy on citizenship in Britain, covering access to nationality and the scope of citizenship rights. With contributions by leading scholars and practitioners of citizenship and immigration law, it provides a comprehensive account of key questions, including discrimination in nationality law, deprivation of citizenship, and the implications of in-country checks of status.’
– Bernard Ryan, University of Leicester, UK

‘This book addresses a most timely topic – British citizenship – from all possible perspectives: practice, theory and policy and from various academic disciplines. It provides for a very welcome contribution to discussions on every day politics and on knowledge on the legal position of many different categories of immigrants. In these times of turmoil citizenship can be a basis for security and rights and therefore it is essential to examine all its dimensions carefully. This book is an indispensable aid for knowing more about British citizenship.’
– Frans Pennings, Utrecht University, the Netherlands

‘When the exception becomes the norm, the power of the sovereign is arbitrary, just as in pre-democratic times. But such arbitrariness is not random: it is applied primarily to certain categories of what used to be called “the lower orders” of society –the undocumented immigrants and the racially “other, ” regardless of prior citizenship status. The very notion of citizen becomes vague and the status can be lost through a Kafkaesque process in which the state is unfathomable and often acts behind the scenes. This book edited by Devyani Prabhat brings together academics and lawyers working in the field of nationality and immigration laws, and shows how what has long been a feature of the labor market, namely, the precarious nature of jobs, has now become a feature of basic rights of “belonging.” Citizenship is precarious too. The chapters in this volume lead us straight to the question: What is the rule of law in such state of indistinction? Societies in decadence, like the current Western powers, entwine retrenchment with resentment, the exceptional with the normal, the in-group with the out-group. Devyani Prabhat and her colleagues analyze with great precision the alarming advance of legal imprecision, the interests that are vested in categorical confusion, and the erosion of basic rights in societies like the UK and the US – notably the right of persons to reside in peace and without fear.’
– Juan Corradi, New York University, US
Contributors
Contributors: F. Bawdon, C. Bertram, T. Brooks, B. Byrne, A. Harvey, P. Mindus, D. Prabhat, D. Smith, S. Valdez-Symonds, C. Yeo

2. The Life in the UK Citizenship Test and the Urgent Need for Its Reform
Thom Brooks

3. Naturalisation and becoming a citizen in the UK
Bridget Byrne

6. The Immigration Act 2014 and the Right to Rent
David Smith

9. Remember when 'Windrush' was still just the name of a ship?
Fiona Bawdon

10. The Blurred Lines of British Citizenship and Immigration Control: The Ordinary and the Exceptional
Devyani Prabhat