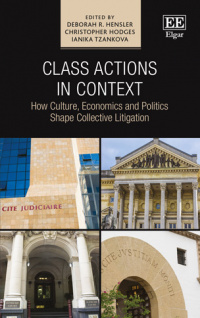 9781783470433 Edward Elgar Publishing
Edited by Deborah R. Hensler, Stanford Law School, US, Christopher Hodges, Centre for Socio-Legal Studies and Wolfson College, Oxford, UK and Ianika Tzankova, University of Tilburg, the Netherlands
Publication Date: 2016 ISBN: 978 1 78347 043 3 Extent: 448 pp
In recent years collective litigation procedures have spread across the globe, accompanied by hot controversy and normative debate. Yet virtually nothing is known about how these procedures operate in practice. Based on extensive documentary and interview research, this volume presents the results of the first comparative investigation of class actions and group litigation ‘in action’, in the Americas, Europe, Asia and the Middle East.

More Information
Critical Acclaim
Contributors
Contents
More Information
In recent years collective litigation procedures have spread across the globe, accompanied by hot controversy and normative debate. Yet virtually nothing is known about how these procedures operate in practice. Based on extensive documentary and interview research, this volume presents the results of the first comparative investigation of class actions and group litigation ‘in action’.

Produced by a multinational team of legal scholars, this book spans research from ten different countries in the Americas, Europe, Asia and the Middle East, including common law and civil law jurisdictions. The contributors conclude that to understand how class actions work in practice, one needs to know the cultural factors that shape claiming, the financial arrangements that enable or impede litigation and how political actors react when mass claims erupt. Substantive law and procedural rules matter, but culture, economics and politics matter at least as much.

This book will be of interest to students and scholars of law, business and politics. It will also be of use to public policy makers looking to respond to mass claims; financial analysts looking to understand the potential impact of new legal instruments; and global lawyers who litigate transnationally.

Critical Acclaim
‘Class Actions in Context is a penetrating analysis of class and group actions worldwide. A group of international scholars brings to bear legal, economic and political analyses of this evolving judicial remedy. It explores various substantive claims ranging from consumer protection to securities litigation. Drawing on case studies of practice as well as legal analysis, it demonstrates the importance of factors running from litigation finance to background cultural traditions. It is worth study in every legal system.'
– Geoffrey C. Hazard, University of California, Hastings College of the Law, US
Contributors
Contributors: A. Barroilhet, C. Cameron, N. Creutzfeldt, M.A. Gómez, A. Halfmeier, D.R. Hensler, C. Hodges, K.-C. Huang, J. Kalajdzic, A. Klement, B. Stier, E. Thornburg, I. Tzankova, S. Voet

3. Smoke Signals from the South: The Unanticipated Effects of an ‘Unsuccesful’ Litigation on Brazil’s Anti-Tobacco Wars
Manuel A. Gómez

4. Using Associations as a Vehicle for Class Action: The Case of Taiwan
Kuo-Chang Huang

5. The Promise and Peril of Media and Culture: The Toyota Unintended Acceleration Litigation and the Gulf Coast Claims Facility in the United States
Byron Stier

10. The Class Attorney – An Agent Without a Principle: The Israeli Case of Shemesh V. Reichart
Alon Klement

11. The Engine that Drives: Fees, Costs and the Canadian Class Action
Jasminka Kalajdzic

13. Litigation Without End? The Deutsche Telekom Case and the German Approach to Private Enforcement of Securities Law
Axel Halfmeier

16. Public as Private and Private as Public: MTBE Litigation in the United States
Elizabeth Thornburg