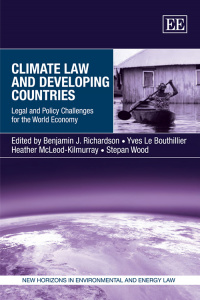 With contributions from over 20 international scholars from developing and developed countries, the book tackles both long-standing concerns and current controversies. It considers the positions of developing countries in the negotiation of a new international legal regime to replace the Kyoto Protocol and canvasses various domestic issues, including implementation of CDM projects, governance of adaptation measures and regulation of the biofuels industry.

Through a unique focus on the developing world, this book makes a significant contribution to understanding current challenges and future directions of climate law. It will prove a stimulating read for legal academics, undergraduate and graduate law students as well as policymakers interested in the role of developing countries in climate change law.

The book originates from an international conference on Climate Law in Developing Countries Post-2012, co-sponsored by the IUCN Academy of Environmental Law, the University of Ottawa Faculty of Law and Osgoode Hall Law School. The book is part of the ongoing mandate of the IUCN Academy of Environmental Law to generate collaborative research on the most pressing issues in environmental law.
Critical Acclaim
‘. . . the book is rich and unique. It offers very useful analysis of climate law in developing countries and the key issues in the ongoing negotiations. . . an important source of reference.’
– Environmental Law Review

‘The editors of Climate Law and Developing Countries have brought together a star-studded group of authors with often innovative views on how climate law works (or fails to work) in those countries where it arguably matters more than elsewhere. This volume largely avoids the pitfalls of climate and carbon jargon. It may well succeed in reconnecting the regulatory community to a field of law which has rapidly become the exclusive habitat of banking and finance lawyers. A superb read and reference treasure trove.’
– Geert van Calster, Katholieke Universiteit Leuven, Belgium

‘Global warming is essentially an issue of human rights and justice severely affecting poor countries and indigenous peoples. This book shows why and how climate justice must shape international and domestic climate law. A timely, must-read companion for climate experts and activists, but equally a reminder of how much is left to be learned by negotiators of post-Kyoto agreements.’
– Klaus Bosselmann, University of Auckland, New Zealand and IUCN Commission on Environmental Law Ethics Specialist Group

‘The phenomenon of anthropogenic climate change has become of critical importance to all countries. However, while the majority of developing countries contribute the least to global greenhouse gas emissions, they will generally bear the major burden of the social, environmental and economic impacts of climate change imposed upon them by developed countries. This cutting-edge book contains outstanding contributions by scholars from around the world on the need to expand the range of legal and policy mechanisms and strategies required to bridge the gaps between the north and the south to achieve global climate justice.’
– Ben Boer, University of Sydney and former Co-director of the IUCN Academy of Environmental Law

‘When the IUCN Academy and its partners gathered leading observers of climate law and developing countries they performed a great service. These challenging essays underscore the complexity of mitigation and adaptation issues in the developing world. They guide us past finger-pointing and electric cars towards climate policies reflecting the reality that in their differentiated circumstances, the countries of the North and South only have one planet to care for and not a lot of time to get on with the job.’
– Jamie Benidickson, University of Ottawa, Canada and former Co-director of the IUCN Academy of Environmental Law
Contributors
Contributors: S. Atapattu, D. Badrinarayana, K. Bastmeijer, C. Dutra, S. Erens, R. Fowler, W. Hare, E.B. Kasimbazi, E. Kwa, M.-P. Lanfranchi, Y. Le Bouthillier, J. Lin, K. Macey, S. Maljean-Dubois, H. McLeod-Kilmurray, D.S. Olawuyi, M. Peeters, B.J. Richardson, F. Sindico, C. Stockwell, S. Teles da Silva, J. Verschuuren, C. Voigt, A. Williams, S. Wood
Contents
Contents:

5. Climate Change and Indigenous Peoples in the South Pacific: The Need for Regional and Local Strategies
Eric Kwa

12. Policy and Legal Dimensions of CDM Projects in the Forestry Sector: Implications for Climate Change Mitigation and Adaptation in Uganda
Emmanuel B. Kasimbazi

PART IV: CLIMATE POLICY BRIDGING THE NORTH AND SOUTH
14. Improving Citizen Responsibility in the North and its Consequences for the South: Voluntary Carbon Offsets and Government Involvement
Marjan Peeters

15. Climate and Trade in a Divided World: Can Measures Adopted in the North End Up Shaping Climate Change Legislative Frameworks in the South?
Francesco Sindico