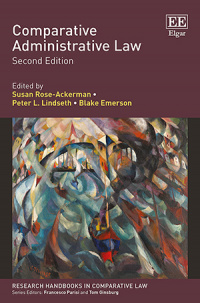 A particular focus is on administrative independence with its manifold implications for separation of powers, democratic self-government, and the boundary between law, politics, and policy. Several chapters highlight the tensions between impartial expertise and public accountability; others consider administrative litigation and the role of the courts in reviewing both individual decisions and secondary norms. The book concludes by asking how administrative law is shaping and is being shaped by the changing boundaries of the state, especially shifting boundaries between the public and the private, and the national and the supranational domains.

PART I CONSTITUTIONAL STRUCTURE AND ADMINISTRATIVE LAW: TRADITIONS AND TRANSFORMATIONS
1. Révolution, Rechtsstaat and the Rule of Law: Historical Reflections on the Emergence and Development of Administrative Law
Bernardo Sordi

3. Politics and Agencies in the Administrative State: the US Case
Peter L. Strauss

6. The ‘Neue Verwaltungsrechtswissenschaft’ against the Backdrop of Traditional Administrative Law Scholarship in Germany
Andreas Voßkuhle and Thomas Wischmeyer

10. The Puzzle of Independence and Parliamentary Democracy in the Common Law World: A Canadian Perspective
Lorne Sossin

11. Assessing the Theory of Presidential Dominance: Empirical Evidence of the Relationship between the Executive Branch and Regulatory Agencies in Brazil
Mariana Mota Prado

12. Experimenting with Independent Commissions in a New Democracy with a Civil Law Tradition: The Case of Taiwan
Jiunn-rong Yeh

13. Flag-Bearers of a New Era? The Evolution of New Regulatory Institutions in India (1991-2016)
Arun Kumar Thiruvengadam

14. A Comparison of US and European Independent Commissions
Martin Shapiro

17. The 2015 French Code of Administrative Procedure: An Assessment
Dominique Custos

20. Comparing Regulatory Oversight Bodies: The US Office of Information and Regulatory Affairs and the EU Regulatory Scrutiny Board
Jonathan B. Wiener and Alberto Alemanno

21. Looking for Smarter Government (and Administrative Law) in the Age of Uncertainty
Giulio Napolitano

26. The Powers and Duties of the French Administrative Law Judge
Jean Massot

27. Judicial Review of Agency Action in the US and Israel: The Choice Between Open and Closed Review
Michael Asimow and Yoav Dotan

28. The ‘Double Helix’ of Process and Substance Review before the UK Competition Appeal Tribunal: A Model Case or a Cautionary Tale for Specialist Courts?
Athanasios Psygkas

30. Legal Management of Urban Space in Japan and the Role of the Judiciary
Narufumi Kadomatsu

31. The Courts and Public Space: France, the UK and the US in Historical Perspective
Thomas Perroud

PART V ADMINISTRATIVE LAW AND THE BOUNDARIES OF THE STATE
A. PUBLIC AND PRIVATE
32. Three Questions of Privatization
Daphne Barek-Erez

33. Contracting Out and ‘Public Values’: A Theoretical and Comparative Approach
Jean-Bernard Auby

34. Organizational Structure and Culture in an Era of Privatization: The Case of United States Military and Security Contractors
Laura A. Dickinson

B. ADMINISTRATIVE LAW BEYOND THE STATE: THE CASE OF THE EU
36. A Framework for Historical Comparison of Control of National, Supranational and Transnational Public Power
Peter Cane

39. Administrative Law Reform in the European Union: the ReNEUAL Project and its Basis in Comparative Legal Studies
Herwig C.H. Hofmann and Jens-Peter Schneider

41. What’s in a Label? The EU as “Administrative” and “Constitutional”
Peter L. Lindseth