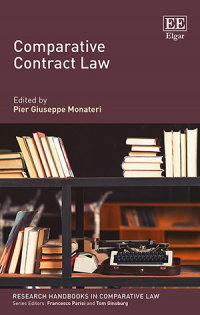 9781849804516 Edward Elgar Publishing
Research Handbooks in Comparative Law series
Edited by Pier Giuseppe Monateri, Professor of Comparative Law, Department of Law, University of Turin, Italy
Publication Date: 2017 ISBN: 978 1 84980 451 6 Extent: 576 pp
This comprehensive Handbook offers a thoughtful survey of contract theories, issues and cases in order to reassess the field's present vision of contract law. It engages a critical search for the fault lines which cross traditions of thought and globalized landscapes. Comparative Contract Law is built around four main groups of insights, including: the genealogies of contractual theoretical thinking; the contentious relationship between private governance and normative regulations; the competing styles used to stage contract law; and the concurring opinions expressed within the domain of other disciplines, such as literature and political theory. The chapters in the book tease out the tensions between a global context and local frameworks as well as the movable thresholds between canonical expressions and heterodox constructions.

More Information
Critical Acclaim
Contributors
Contents
More Information
This comprehensive book offers a thoughtful survey of theories, issues and cases in order to reassess the present vision of contract law. ‘Comparative’ refers both to the specific kind of methodologies implied and to the polyphonic perspectives collected on the main topics, with the aim of superseding the conventional forms of representation. In this perspective, the work engages a critical search for the fault lines, which crosses traditions of thought and globalized landscapes.

Notwithstanding contract’s enduring presence and the technicalities devoted to managing clauses and interpretation, the inquiry on the proper nature of contract and its status and collocation within private legal taxonomies continues to be a controversial exercise. Moving from a vast array of dissimilar inclinations, which have historically produced heterogeneous maps of law, this book is built around the genealogies of contractual theoretical thinking; the contentious relationship between private governance and normative regulations; the competing styles used to stage contract law; the concurring opinions expressed within the domain of other disciplines, such as literature and political theory; the tensions between global context and local frames; and the movable thresholds between canonical expressions and heterodox constructions.

For its careful analysis and the wide range of references employed, Comparative Contract Law will be a tremendous resource for academics, legal scholars and interdisciplinary experts as well as judges and law practitioners.

Critical Acclaim
‘Comparative Contract Law redefines approaches to comparative law by incorporating what might be called "internal comparative law", while also exploring transnational law, party autonomy, and the legal environment beyond states and their diverse legal systems. The book is also innovative given its inclusion of comparative studies in law and economics and law and literature, which shows that disciplines that are usually considered to be "external" to law are indeed relevant for the assessment and for the reform of law.’
– Sebastian McEvoy, University of Paris Ouest Nanterre La Défense, France

4. Contract and the Comparatist: Should We Think About Contract in Terms of ‘Contracticles’?
Geoffrey Samuel

10. Who is the Contracting Party? A Trip Around the Transformation of the Legal Subject
Maria Rosaria Marella

14. Contracts in Literature: from Doctor Faustus to Vampires
Daniela Carpi

20. Party Autonomy in Global Context: An International Laywer’s Take on the Political Economy of a Self-constituting Regime.
Horatia Muir Watt