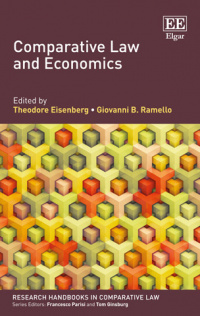 9780857932570 Edward Elgar Publishing
Research Handbooks in Comparative Law series
Edited by the late Theodore Eisenberg, formerly Cornell University, US and Giovanni B. Ramello, Department of Economics and Statistics "Cognetti de Martiis", Università degli studi di Torino, Italy
Publication Date: March 2016 ISBN: 978 0 85793 257 0 Extent: 512 pp
Contemporary law and economics has greatly expanded its scope of inquiry as well as its sphere of influence. The extension to many idiosyncratic topics and issues that sometime lie outside the traditional domain of the discipline have fostered the emergence of a new consciousness better grasped by a comparative approach. The original contributions to this Research Handbook provide a glimpse of the new perspectives that enrich the law and economics methodology.

With contributions from leading scholars from around the world, the Handbook sets the context by examining the past, present and future of comparative law and economics before addressing this approach to specific issues within the fields of intellectual property, competition, contracts, torts, judicial behaviour, tax, property law, energy markets, regulation and environmental agreements.

This topical Handbook will be of great interest and value to scholars and postgraduate students of law and economics, looking for new directions in their research. It will also be a useful reference to policymakers and those working at an institutional level.

Critical Acclaim
‘This remarkable volume shows off the eclectic potential of the comparative law and economics brand. It is comparative not only in assembling scholars from around the world and in zipping from Taiwanese civil disputes to international high courts to drug regulators for case studies, but most importantly in highlighting an empirical methodology that welcomes a range of complementary approaches that broadens the core economic analysis of law. It’s a fascinating tour across boundaries.’
– Stewart J. Schwab, Cornell Law School, US

PART I THEORETICAL ISSUES
1. The Past, Present and Future of Comparative Law and Economics
Giovanni B. Ramello

3. Law, Social Norms, and Standards: Their Nexus with Government and their Impact on the Economic Performance of Nation States
Nicholas Mercuro

4. The Market for Legal Innovation: Law and Economics in Europe and the United States,
Nuno Garoupa and Thomas S. Ulen

7. A Comparative View of Local Tax and Expenditure Limitations and their Consequences
Federico Revelli

10. The Comparative Law and Economics of Energy Markets
Giuseppe Bellantuono

13. Copyright and Tort as Mirror Models: On Not Mistaking for the Right Hand What the Left Hand is Doing
Wendy J. Gordon

14. The Eurozone Crisis, the Defective Policy Response and the Need for Institutional Innovation
Enrico Marelli and Marcello Signorelli

17. Copyright Law and the Supply of Creative Work: Evidence from the Movies
Ivan Paak Liang Png and Qiu-hong Wang

19. The American and the European Market of Human Experimentation, A Comparative Study on Regulation and Competitiveness
Antonella Foddis and Roberto Ippoliti