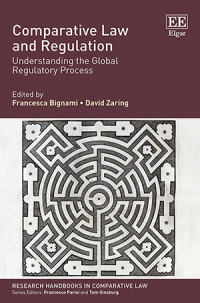 9781788118538 Edward Elgar Publishing
Research Handbooks in Comparative Law series
Edited by Francesca Bignami, Professor of Law, The George Washington University Law School, US and David Zaring, Associate Professor of Legal Studies and Business Ethics, The Wharton School, University of Pennsylvania, US
Publication Date: 2018 ISBN: 978 1 78811 853 8 Extent: 608 pp
Governance by regulation – rules propounded and enforced by bureaucracies – is taking a growing share of the sum total of governance. Once thought to be an American phenomenon, it is now a central form of state action in every part of the world, including Europe, Latin America, and Asia, and it is at the core of much international lawmaking. In Comparative Law and Regulation, original contributions by leading scholars in the field focus both on the legal dimension of regulation and on how this dimension operates in those places that have turned to regulation to meet their obligations.

More Information
Critical Acclaim
Contributors
Contents
More Information
Today the regulation of everything from e-commerce and product safety to air quality is global. To understand how regulation is made and enforced in the multiple domestic and international jurisdictions involved, it is necessary to move beyond conventional sub-fields of law like administrative law and international law. Drawing on contributions from leading scholars with diverse subject and country expertise, Comparative Law and Regulation introduces a new field of legal research geared at understanding the operation of the global regulatory process. The book affords cutting-edge analysis of the entire gamut of regulatory law: rulemaking by bureaucracies, legislatures, and private bodies; oversight by public and private actors; civil and criminal enforcement; and judicial review. The chapters cover over thirty different domestic and international jurisdictions, including the United States, Germany, the European Union, India, China, South Korea, Colombia, the World Trade Organization, and private investor-state arbitral tribunals.

The theoretical and methodological innovations introduced in this book will make it compulsory reading for scholars of public law, comparative law, and international law as well as those working in public policy, political science, and economics. For legal professionals in government agencies and the private sector, it affords both a useful theoretical framing of the multifaceted issues involved in international and comparative regulation and an overview of the legal and technical aspects.

Critical Acclaim
‘The fields of comparative administrative law and its close cousin, regulatory law, are now experiencing the explosion that occurred a while ago in comparative constitutional law. This Bignami and Zaring book provides both excellent introduction into these newest developments and a record of substantial research achievements.’
– Martin Shapiro, University of California, Berkeley, School of Law, US

‘Comparative Law and Regulation invites and assists scholars and policy makers to reassess how regulation operates within their own countries in light of the experience of other countries. The twenty-one chapters, written by leading scholars, weave together multiple disciplinary perspectives to capture the rich complexity of regulatory processes in an accessible and helpful manner. Bignami and Zaring have edited a commanding contribution to the emerging field of comparative law and regulation.’
– Sidney Shapiro, Wake Forest University, US

‘Comparative Law and Regulation: Understanding the Global Regulatory Process opens a new frontier in administrative and comparative law. It visualizes the subject of government regulation of private business enterprise in international terms. It examines the ways in which different countries as well as international organizations engage in regulation, and the checks and balances that constrain that process. It considers the possibilities of convergence and transplants from one country to another. It examines the many dimensions of the problem including developed vs. developing countries, private vs. public regulators, and pluralistic vs. neo-corporatist systems. Global regulation is a subject of immense practical and political importance, and this volume does justice to its complexity.’
– Michael Asimow, Stanford Law School, US

PART I THE REGULATORY STATE ACROSS THE GLOBE
1. The Historical Origins of American Regulatory Exceptionalism
Reuel Schiller

5. Regulatory Procedure and Participation in the European Union
Stijn Smismans

7. Access to Information in the UK and India
Ben Worthy

9. Can Private Class Actions Enforce Regulations? Do They? Should They?
Deborah R. Hensler

21. Governing Disasters: The Challenge of Global Disaster Law and Policy
Eric A. Feldman and Chelsea Fish