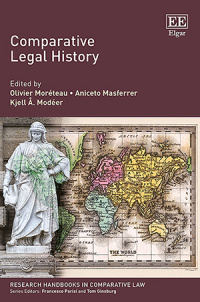 Cementing a solid theoretical grounding for the discipline, legal historians and comparatists place this subject at the forefront of legal science. Comprehensive in coverage, this handbook collates theory and method for comparative legal history, as well as discussing international legal sources and judicial and civil institutions. Particular attention is paid to custom and codification, contracts, civil procedure and ownership. By assessing the evolution of law across European, Asian, African and American environments from the pre-modern era to the nineteenth century, the chapters provide stimulating and enlightening cases of legal history through a comparative lens.

A centrepiece for this field of scholarship, this research handbook will be an essential resource for scholars interested in comparative law, legal theory and legal history, from both legal and social science backgrounds.

PART I Theory and Methods
1. What is comparative legal history? Legal historiography and the revolt against formalism, 1930-60
Adolfo Giuliani

PART II LEGAL SOURCES
5. Here, there, everywhere or... nowhere? Some comparative and historical afterthoughts about custom as a source of law
Jacques Vanderlinden

6. Convergence and the colonization of custom in pre-modern Europe
Emily Kadens

7. Custom as a source of law in European and East Asian legal history
Marie Seong-Hak Kim

8. The ius commune as the ‘ratio scripta’ in the civil law tradition: a comparative approach to the Spanish case
Aniceto Masferrer and Juan A. Obarrio

9. Legal education in England and continental Europe between the middle ages and the early-modern period: a comparison
Dolores Freda

11. Killing the vampire of human culture: Slavery as a problem in international law
Paul Finkelman and Seymour Drescher

13. The genesis of concepts of possession and ownership in the civilian tradition and at common law: how did common law manage without a concept of ownership? Why Roman law did not
Anna Taitslin

14. The common law and the Code civil: the curious case of the law of contract
Warren Swain

15. When the wind turned from South to West: the transition of Scandinavian legal cultures 1945–2000, a comparative sketch
Kjell Å. Modéer

17. Owning the conceptualization of ownership in American civil law jurisdictions and the origins of nineteenth-century code provisions
Agustín Parise

18. Why was private law not codified in Sweden and Finland?
Heikki Pihlajamäki