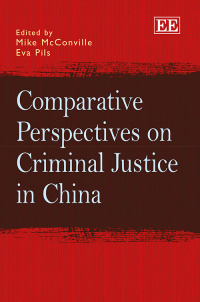 9781781955857 Edward Elgar Publishing
Edited by Mike McConville, Emeritus Professor and Honorary Fellow, Centre for Rights and Justice, Faculty of Law, The Chinese University of Hong Kong and Eva Pils, The Dickson Poon School of Law, King's College London, UK
Publication Date: 2013 ISBN: 978 1 78195 585 7 Extent: 624 pp
Comparative Perspectives on Criminal Justice in China is an anthology of chapters on the contemporary criminal justice system in mainland China, bringing together the work of recognised scholars from China and around the world.

More Information
Critical Acclaim
Contributors
Contents
More Information
Comparative Perspectives on Criminal Justice in China is an anthology of chapters on the contemporary criminal justice system in mainland China, bringing together the work of recognised scholars from China and around the world.

The book addresses issues at various stages of the criminal justice process (investigation and prosecution of crime and criminal trial) as well as problems pertaining to criminal defence and to parallel systems of punishment. All of the contributions discuss the criminal justice system in the context of China’s legal reforms. Several of the contributions urge the conclusion that the criminal process and related processes remain marred by overwhelming powers of the police and Party-State, and a chapter discussing China’s 2012 revision of its Criminal Procedure Law argues that the revision is unlikely to bring significant improvement.

This diverse comparative study will appeal to academics in Chinese law, society and politics, members of the human rights NGO and diplomatic communities as well as legal professionals interested in China.
Critical Acclaim
‘Comparative Perspectives on Criminal Justice in China is highly recommended. The editors have assembled the leading Western and Chinese scholars in the field to examine the administration of criminal justice in China, showing both how far the system has come and the challenges that lie ahead. This is an important and timely book. It is essential reading for anyone who wants to understand or has to deal with the Chinese criminal justice system.’
– Klaus Mühlhahn, Freie Universität Berlin, Germany

‘This highly informative and engaging volume on the Chinese criminal justice system today provides a window into the vagaries of law and its operation in the People’s Republic. McConville and Pils bring together an impressive array of scholars whose studies span the criminal process. From initial police investigation, through to prosecution and sentencing of defendants, we see how dominant values in the Chinese state and its structures of power make the practice of criminal justice today still intensely political.’
– Susan Trevaskes, Griffith University, Australia

2. Comparative Empirical Co-ordinates and the Dynamics of Criminal Justice in China and the West
Mike McConville

PART II: THE INVESTIGATION OF CRIME
3. Wrongful Convictions and Tortured Confessions: Empirical Studies in Mainland China
He Jiahong and He Ran

PART III: THE PROSECUTION OF CRIME AND TRIAL PROCESS
6. Issues in the Reform of China’s Public Prosecution System – Against the Backdrop of New Revisions to the Criminal Procedure Law
Chen Guangzhong

PART IV: CRIMINAL DEFENCE
9. Lawyers’ Activism and the Expansion of the Right to Counsel in Taiwan
Yu-Jie Chen

12. Who Should be Entitled to Initiate a Mental Examination Process? An Empirical Perspective
Zhiyuan Guo

13. Killing the Lawyer as the Last Resort: The Li Zhuang Case and its Effects on Criminal Defence in China
Lan Rongjie

15. Legal Erosion and the Policing of Petitions
Flora Sapio