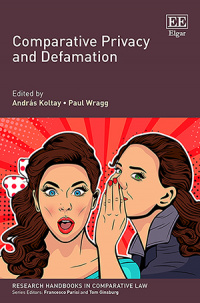 Comparative Privacy and Defamation provides insightful commentary on issues of theory and doctrine, including the challenges of General Data Protection Regulations (GDPR) and the impact of new technologies on the law. Chapters explore the origins and development of the right to privacy, privacy rights of photographic subjects and defamation by photo-manipulation, and the right to be forgotten. Containing contributions from expert international scholars, this comprehensive Handbook investigates the liability of internet intermediaries in cases of defamation and the emerging problem of global injunctions before concluding with eight country focussed studies.

Engaging and accessible, this Handbook will be a key resource for students and scholars researching in the fields of privacy and defamation law, internet and technological law and information and media law.

Critical Acclaim
‘Comparative Privacy and Defamation couldn’t be more timely and relevant to freedom of expression academics and practitioners in the global 21st century. More wide-ranging and in-depth than other similar publications, the book is a remarkable contribution to international, foreign, and comparative law. Its topical comprehensiveness and authorial diversity and prestige will make the volume a must read for those interested in the subject.’
– Kyu Ho Youm, University of Oregon, US

Theoretical considerations
1. The origins and development of the right to privacy
John Campbell

4. Separated by a common language: The anti-paternalism principle in US and English defamation and privacy law
Paul Wragg

Privacy laws compared
5. Weighing content: Can expression be more or less important?
Categorical or case by case balancing and its (respective) disposition to rank relevance of communication
Matthias Cornils

6. What is it the public has a right to know? The right to privacy for public officials and the right access to official documents – European and Swedish perspectives
Jane Reichel

7. Do we need to separate privacy and reputation? USA, Europe and Korea compared
Kyung Sin Park

12. Right to be forgotten in the global information economy
Joanna Kulesza

15. A comparative analysis of the treatment of corporate reputation in Australia and the UK
Peter Coe

17. Defamation on the Internet: The role and responsibilities of gatekeepers
András Koltay

18. Privacy, remedies and comity: The emerging problem of global injunctions and some preliminary thoughts on how best to address it
Ron Krotoszynski

24. Defamation and privacy law in Japan – from a comparative perspective
Jun Shimizu