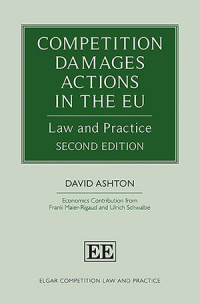 Competition Damages Actions in the EU

9781786430731 Edward Elgar Publishing
Elgar Competition Law and Practice series
David Ashton, Secretariat of the Committee on the Internal Market and Consumer Protection, European Parliament, Brussels
Publication Date: 2018 ISBN: 978 1 78643 073 1 Extent: 544 pp
In this revised and much expanded second edition David Ashton provides a comprehensive review of the EU damages directive (Directive 2014/104/EU) and its implementation, bringing the book up to date with the latest advances in EU Competition Law damages actions. This edition also features insights from practising lawyers on national developments in over 10 countries across Europe and an updated, separately authored, chapter on the quantification of loss. This book will provide practising lawyers and scholars alike with a clear, well-structured and updated guide to EU Competition Law Damages.

More Information
Critical Acclaim
Contributors
Contents
More Information
Competition Damages Actions in the EU offers a clear and concise analysis of the latest legislation and case law, at both EU and national level, in the field of damages actions for breach of EU competition law. This second edition features contributions from practising lawyers in more than ten jurisdictions, as well as offering a thorough analysis of Directive 2014/104. The author explores all aspects of the subject, including substantive problems, such as indirect purchaser standing and passing-on. He examines evidentiary issues, such as access to documents, particularly in the context of leniency programmes, and the probative value of competition authority decisions.

Key features of the second edition include:

• First major substantive volume looking at actions for damages under EU competition law since the Commission’s proposal, with a thorough review of the Damages Directive of 2014

• Comprehensive yet accessible text from an experiential viewpoint

• Key section on the quantification of damages in the context of competition law infringements, written by specialist economists.

This thorough exposition will be an invaluable resource for practitioners at all levels – from lawyers in private practice, to judges and competition enforcement officials. Being the first to offer a detailed analysis of damages in the context of the new legislation, this book will also appeal to scholars and students of EU competition law.

Critical Acclaim
‘The Author fully achieves the objective of the book. It provides a clear discussion of the main aspects of competition law damages actions with a comparative angle. It is clearly written and well researched. Contributions from some of the main EU jurisdictions enrich this valuable work. It is highly recommended.’
– Riccardo Sciaudone, The Competition Law Observatory (CLO)

‘This is a useful book. It is a good outline of the issues and law for the practitioner who may be faced with mounting (or defending) such a claim. . . it is a useful reference for an academic lawyer, or for the student. As an academic, I will add this to my courses’ reading lists.'
– Global Competition Litigation Review

‘The author and his team of contributors are to be congratulated on this excellent work, which is accessible to both the practitioner and the scholar.’
– Matthew O’Regan, Competition Law Journal