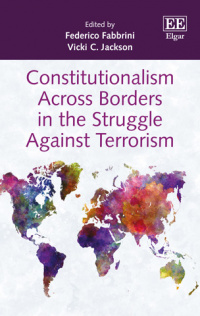 Constitutionalism Across Borders in the Struggle Against Terrorism

9781784715380 Edward Elgar Publishing
Edited by Federico Fabbrini, Professor of EU Law, School of Law & Government, Dublin City University, Ireland and Vicki C. Jackson, Thurgood Marshall Professor of Constitutional Law, Harvard Law School, US
Publication Date: 2016 ISBN: 978 1 78471 538 0 Extent: 368 pp
This edited collection explores the topic of constitutionalism across borders in the struggle against terrorism, analyzing how constitutional rules and principles relevant in the field of counter-terrorism move across borders. What emerges is a picture of the complex interplay of constitutional law, international law, criminal law and the law of war, creating webs of norms and regulations that apply in the struggle against terrorism conducted across increasingly porous borders.

Various chapters underline how constitution-like norms consolidate at the level of international and supranational organizations as a limit to the exercise of public power in the field of counter-terrorism policy, especially counter-terrorism financing. Other chapters examine the extraterritorial application of constitutional rights and the migration of constitutional norms – or anti-constitutional practices – from one state to another. Still others consider how transnational cooperation between states in areas such as intelligence gathering and data sharing may call for updating domestic constitutional law rules or for new international law compacts entrenching rights across borders. What emerges is a picture of the complex interplay of constitutional law, international law, criminal law and the law of war, creating webs of norms and regulations that apply in the struggle against terrorism conducted across increasingly porous borders.

The book will be of particular interest to academics and graduate or postgraduate students working in the fields of constitutional law, international law, human rights, comparative law and national security law. It may also be of interest to practitioners concerned with national security, counter-terrorism, and related questions of individual rights.

Critical Acclaim
‘Just as current terrorism threats permeate state borders, legal responses to them should as well. Bringing together and making a significant contribution to comparative constitutionalism, international law, and the anti-terrorism law, this book perfectly exemplifies the benefits of transmitting legal concepts and ideas across geographical and conceptual borders – between differing national systems, as well as in manners that open international law and constitutional law to one another. It is a wonderful source for studying and understanding anti-terrorism law, and at the same time an inspiration to those thinking about the tension between globalized and contextualized law.’
– Daphne Barak-Erez, Justice of the Supreme Court of Israel

‘Since September 2001, international terrorism has been the major challenge to the traditional understanding of modern constitutionalism, based on state territorial institutions. The outstanding contributions collected by Fabbrini and Jackson address this challenge under many respects and in many different fields; yet, they all confront a common concern: how to accommodate the basic constitutional guarantees such as human rights, rule of law and due process to actions that overcome territorial borders? In the twenty-first century, security implies control over people, finance and data that move quickly across the borders. Antiterrorism legislation requires a multi-directional cooperation of actors at the transnational level, including regional and international organizations. The book explores this multifaceted branch of law and offers a rich plurality of reading of the major legal responses to one of the most relevant social, political and legal difficulties of our time.’
– Marta Cartabia, Vice President of the Constitutional Court, Italy

‘No one nation is equipped to combat terrorism. The problem transcends borders and the traditional demarcation of the state. This presents a challenge to constitutional norms and national legal structures. This book represents an insightful and engaging response. It contains a stellar cast of authors who dissect and analyze these issues in a series of illuminating contributions.’
– George Williams, Scientia Professor, University of New South Wales, Australia

4. Heroic or Hapless? The Legal Reforms of Counter-Terrorism Financial Sanctions Regimes in the European Union
Karen Cooper and Clive Walker

5. The Dynamics of Transnational Counter-terrorism law: Towards a Methodology, Map and Critique
Cian C. Murphy

7. Japanese Efforts to have a Secrecy Law and a 'National Security Council' A Runner Who Is One Lap Behind? or Good Things Come to Those Who Wait?
Akiko Ejima

8. The Deep Dilemma of Evidence in the Global Anti-Terror Campaign
Kim Lane Scheppele

11. The Extra-territorial Obligations of European States regarding Human Rights in the Context of Terrorism
Brice Dickson

12. Detention at Sea: The Persistence of Territorial Constraints on Constitutional Rights
Jonathan Hafetz