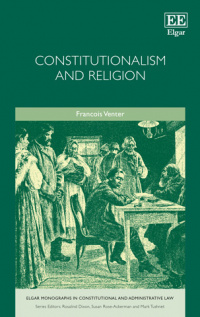 9781785361616 Edward Elgar Publishing
Elgar Monographs in Constitutional and Administrative Law
Francois Venter, Extraordinary Professor, Faculty of Law, North-West University, South Africa
Publication Date: November 2015 ISBN: 978 1 78536 161 6 Extent: 288 pp
This topical book examines how the goals of constitutionalism – good and fair government – are addressed at a time when the multi-religious composition of countries’ populations has never before been so pronounced.

More Information
Critical Acclaim
Contents
More Information
This topical book examines how the goals of constitutionalism – good and fair government – are addressed at a time when the multi-religious composition of countries’ populations has never before been so pronounced. How should governments, courts and officials deal with this diversity? The widely accepted principle of treating others as you wish them to treat you and the universal recognition of human dignity speak against preferential treatment of any religion. Faced with severe challenges, this leads many authorities to seek refuge in secular neutrality. Set against the backdrop of globalized constitutionalism in a post-secular era, Francois Venter proposes engaged objectivity as an alternative to unachievable neutrality.

Bringing together the history of church and state, the emergence of contemporary constitutionalism, constitutional comparison and the realities of globalization, this book offers a fresh perspective on the direction in which solutions to difficulties brought about by religious pluralism might be sought. Its wide-ranging comparative analyses and perspectives based on materials published in various languages provide a clear exposition of the range of religious issues with which the contemporary state is increasingly being confronted.

Providing a compact but thorough historical and theoretical exposition, this book is an invaluable resource for students, constitutional scholars, judges and legal practitioners.

Critical Acclaim
‘A timely and immensely scholarly work to explain how present doctrines of secularism could be infused, enriched by the notion of objective constitutionalism. The author’s wide-ranging comparative research and his understanding of religious systems, as well as constitutions, judicial precedent and international law instruments, are most impressive. This is a work that deserves serious worldwide study and attention by academics, students, religious leaders and governments.’
– Marinus Wiechers, Former Principal, University of South Africa

‘Francois Venter’s study of Constitutionalism and Religion is a major contribution to the understanding of church-state relations in the modern age. This global comparative exploration of how governments need to engage with twenty-first century religious pluralism is refracted through the prism of the author’s informed critique of the challenges faced in post-apartheid South Africa. This book is a handy road map when travelling through potentially hostile territory.’
– Mark Hill QC, University of Pretoria, South Africa
Contents
Contents: PART I RELIGION, THE STATE AND CONSTITUTIONALISM 1. The Roots of a Relationship: Religion, The State and its Power 2. Globalization, Constitutional Law and Religion 3. Constitutionalism PART II RELIGION IN LAW 4. Religion in Constitutions 5. Religion in International Law 6. Travails of the Judges in Religious Cases PART III OBLIGATIONS OF THE CONSTITUTIONAL STATE IN RELIGIOUS MATTERS 7. The Weaknesses of Contemporary Statehood in the Face of Religious Pluralism 8. The Demands of Constitutionalism Regarding Religion 9. A Post-secular Approach to Religious Pluralism Index