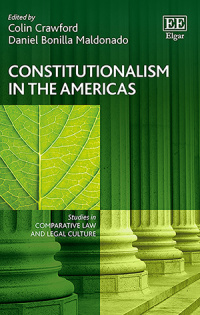 Constitutionalism in the Americas

9781788113328 Edward Elgar Publishing
Studies in Comparative Law and Legal Culture series
Edited by Colin Crawford, Dean and Professor of Law, Louis D. Brandeis School of Law, University of Louisville, US and Daniel Bonilla Maldonado, Universidad de Los Andes, Colombia
Publication Date: 2018 ISBN: 978 1 78811 332 8 Extent: 304 pp
Constitutionalism in the Americas unites the work of leading scholars of constitutional law, comparative law and Latin American and U.S. constitutional law to provide a critical and provocative look at the state of constitutional law across the Americas today. The diverse chapters employ a variety of methodologies – empirical, historical, philosophical and textual analysis – in the effort to provide a comprehensive look at a generation of constitutional change across two continents.

The authors document surprising changes, including the relative decline in the importance of U.S. constitutional jurisprudence outside U.S. borders and the growing exchange of Latin American constitutional thought within Europe and beyond. Accompanying commentary elaborates on the role of constitutional law in global changes in political, social and economic power and influence. The chapters also prompt thinking about a wide range of topics important not just in the Americas, but across the world, including the challenges and implications of using legal transplants and, conversely, the utility and potential of borrowing and adapting constitutional and other legal models to different realities.

PART I The Relationship Between Latin American and U.S. Constitutionalism
2. The Political Economy of Legal Knowledge
Daniel Bonilla Maldonado

3. The Geopolitics of Constitutionalism in Latin America
Jorge L. Esquirol

5. Back to the Future? The return of sovereignty and the principle of non-intervention in the internal affairs of the states in Latin America’s “radical constitutionalism”
Javier Couso

10. The Limits of U.S. Racial Equality Without a Latin American Constitutional “Right to Work” – A Thought Experiment
Tanya Katerí Hernández