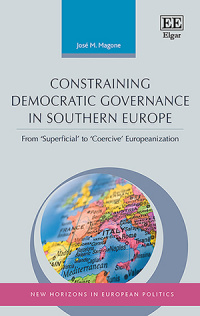 From ‘Superficial’ to ‘Coercive’ Europeanization

9781788111331 Edward Elgar Publishing
New Horizons in European Politics series
José M. Magone, Professor of Regional and Global Governance, Department of Business and Economics, Berlin School of Economics and Law, Germany
Publication Date: 2021 ISBN: 978 1 78811 133 1 Extent: 288 pp
In this thought-provoking book, José M. Magone investigates the growing political, economic and social divisions between the core countries of the European Union and the southern European periphery. He examines the major hindrances that are preventing the four main southern European countries (Italy, Spain, Portugal and Greece) from keeping up with the increasing pace of European integration, and the effects that this is having on democratic governance.

More Information
Critical Acclaim
Contents
More Information
In this thought-provoking book, José M. Magone investigates the growing political, economic and social divisions between the core countries of the European Union and the southern European periphery. He examines the major hindrances that are preventing the four main southern European countries (Italy, Spain, Portugal and Greece) from keeping up with the increasing pace of European integration, and the effects that this is having on democratic governance.

Offering a comprehensive comparative overview of southern European politics over the past two decades, the book analyses the impact of the EU’s political economy on democracy in the region, in particular the consequences of the Eurocrisis and the economic instability of the 2010s. It argues that these countries have failed to proactively initiate necessary strategic reforms in order to prevent economic and democratic stagnation, and have especially struggled to cope with the changing realities of Europeanization and the demands of Economic and Monetary Union.

Students and scholars of European politics will find this book useful and insightful, in particular those interested in southern Europe’s political economy and Europeanization. It will also be beneficial for policy makers working in southern European governments and organizations.
Critical Acclaim
‘Especially after the Great Depression of 2008 and later on with the Pandemic, Southern Europe has become an area of high interest again, as in the years of the transitions to democracy during the 1970s. Today, Southern European countries' crucial issue concerns the European Union's relationships, especially from an economic perspective. Professor Magone, a highly renowned expert of the area, addresses it by dissecting those relationships' decisive aspects and revealing the critical features. This book will be compulsory reading not only for scholars and students of the area but also for all those other experts who are interested in internal–external intertwining in semi-peripheral democracies.’
– Leonardo Morlino, LUISS Guido Carli, Italy

‘Despite his criticisms of the EU for mismanaging the Eurozone crisis, the author underlines the responsibilities of South European governments too. South European elites have not invested in the people of Southern Europe and have “governmentalized” policy networks which ideally should have been multi-level rather than government-centered, as the author correctly puts it. Consequently, his claim that the question is “what Southern Europe can do for the EU”, rather than vice versa, is a point well taken.’
– Dimitri A. Sotiropoulos, National and Kapodistrian University of Athens, Greece
Contents
Contents: Preface 1. The ‘superficial’ Europeanization of southern Europe: the persistence of peripheral governance 2. Southern European trajectories of European integration: from benevolent vincolo esterno to ‘coercive’ Europeanization 3. The semi-peripheral weak state and economy 4. The Europeanization of democratic institutions in southern Europe 5. The Euro crisis and changing party systems in southern Europe 6. The role of socio-economic interest groups in the crisis of southern European capitalism 7. Subnational governance and European cohesion policy: missed opportunities 8. The Euro and sovereign debt crisis and its impact on southern Europe 9. The consequences of the economic crisis: welfare state,
civil society, and government 10. Conclusions: Constraining democracy in southern Europe References Index
Add to Wish List
eBook for individuals
978 1 78811 134 8
From $40.00
Click here for options
eBook for library purchase
978 1 78811 134 8
View sample chapter and check access on: