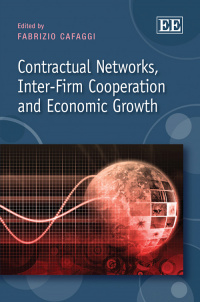 More Information
Critical Acclaim
Contributors
Contents
More Information
This insightful book presents a legal and economic analysis of inter-firm cooperation through networks as an alternative to vertical integration. It examines comparatively various forms of collaboration, ranging from consortia to multiparty joint ventures and from franchising to dealerships.

Collaboration among firms of different sizes helps to overcome numerous weaknesses of the modern western industrial systems. It permits the governing of vertical disintegration without increasing fragmentation and transaction costs and allows firms to benefit from resource complementarities, favouring division of labour. The contributing authors, primarily focusing on Europe and the USA, address important ways in which legal systems provide a framework for inter-firm coordination. It is clear from the analysis that significant obstacles to collaboration still remain, and the authors call for legal reforms at European and Member States level.

This book will prove to be invaluable to academics and law-makers from both economics and law disciplines who are interested in organizational innovation and competitiveness to increase efficiency and redistribute power along the supply chain.
Critical Acclaim
‘Contractual networks – loose associations of firms – are fundamental but little-understood features of the modern economic landscape. Observed across a wide range of industries and in many different settings, these networks present important questions for the theory of the firm and for the analysis of modern industrial organization. This volume brings together cutting edge research on contractual networks across a range of industries, geographic regions, and legal environments – research that demonstrates the extraordinary flexibility and complexity of these forms of industrial organization and illuminates many aspects of their structure and function. Highly recommended.’
– Geoffrey Miller, New York University, US

‘In a rapidly changing context of technological and business innovation, characterised in particular by networks that are geared for coordination and cooperation, multi-party contractual consortia, and linked transactions, is the law fit for purpose? How well does contract law map on to, and serve, markets that are now organised in networked ways? For anyone wishing to engage with these important questions, the essays in this collection, contributed by some of the leading figures in European private law, are essential reading.’
– Roger Brownsword, Kings College London, UK
Contributors
Contributors: C. Aubert de Vincelles, F. Cafaggi, S. Clavel, F. Gómez, S. Grundmann, D. Scalera, S. Whittaker, A. Zazzaro
Contents
Contents:

7. Contract Networks, Freedom of Contract and the Restructuring of Privity of Contract
Simon Whittaker