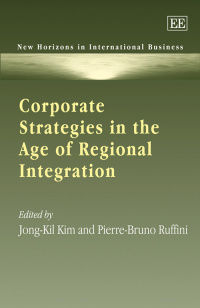 Corporate Strategies in the Age of Regional Integration

More Information
Contributors
Contents
More Information
This book presents various empirical analyses of cross border strategies adopted by global firms with a particular emphasis on the European and East Asian experiences. It also provides studies of the trends and prospects of regional economic integration, focusing mainly on East Asia. The book addresses the topic of economic integration from both a corporate perspective and a policy perspective.

The contributors illustrate the powerful integrative effects of cross border strategies of global firms and their impact on the increasing economic interdependence between countries, as shown for example by production sharing within multinational corporate networks. For their part, governments and policy makers are endeavouring to influence the path of globalisation by means of international cooperation, among which the shaping of regional economic areas is an outstanding one. While Europe still stands unrivalled in terms of its regional integration achievements, East Asian countries are also trying to forge their own path by building preferential trade and investment links on a regional basis. Such attempts are still in their infancy, but they raise some healthy debates to which this edited book makes a valuable contribution.

PART II: REGIONAL ECONOMIC INTEGRATION IN EAST ASIA AND EUROPE: TRENDS AND PROSPECTS
9. Free Trade Agreements in East Asian Countries: What Has Been Done and Needs to Be Done
Jung Taik Hyun and Jin Young Hong

14. The Impact of Trade Integration on FDI Flows: Evidence from the EU and ASEAN+3
Seyed Komail Tayebi and Amir Hortamani