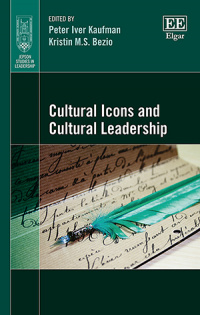 9781786438058 Edward Elgar Publishing
Jepson Studies in Leadership series
Edited by Peter Iver Kaufman, George Matthews & Virginia Brinkley Modlin Chair in Leadership Studies and Kristin M.S. Bezio, Associate Professor of Leadership Studies, University of Richmond, US
Publication Date: 2017 ISBN: 978 1 78643 805 8 Extent: 208 pp
Contributions to this book probe the contexts–both social and spiritual–from which select iconic figures emerge and discover how to present themselves as innovators and cultural leaders, as well as draw material into forms that subsequent generations consider innovative or emblematic. The overall import of the book is to locate producers of culture such as authors, poets, singers, and artists as leaders, both in their respective genres, and of culture and society more broadly through the influence exerted by their works.

More Information
Contributors
Contents
More Information
Authors in this illuminating book probe the social and spiritual contexts from which select iconic figures emerge as innovators and cultural leaders and draw material into forms that subsequent generations consider pioneering and emblematic. The book identifies creators such as novelists, poets, performers and dramatists who are leaders in their respective genres, and in culture and society at large, and examines the influence exerted on and by their works.

Critics and admirers understand the cultural leaders discussed in this book as significant figures affecting social and political change. The chapters cover a range of genres, time periods and individuals, mixing literary and historical analysis with concerns relevant to leadership studies. The book includes a cross-disciplinary analysis focusing on its subjects’ roles as leaders within and beyond their fields.

Scholars and students of religion, history and popular culture with wide-ranging interests in the humanities will find this book a unique and fascinating look at cultural leadership.

8. Billie Holiday and the discipline of progress
Tracy Fessenden

9. A different kind of cultural icon: Allen Ginsberg as a counterleader
Yaakov Ariel

10. I don’t want to fake you out: Bob Dylan and the search for belief in history
Kathryn Lofton