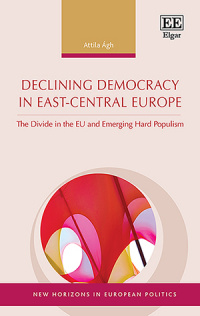 The Divide in the EU and Emerging Hard Populism

9781788974721 Edward Elgar Publishing
New Horizons in European Politics series
Attila Ágh, Professor Emeritus, Institute of Political Science, Budapest Corvinus University, Hungary
Publication Date: 2019 ISBN: 978 1 78897 472 1 Extent: 320 pp
The dramatic decline of democracy in East-Central Europe has attracted great interest world-wide. Going beyond the narrow spectrum of the extensive literature on this topic, this book offers a comprehensive analysis of ECE region – Czech Republic, Hungary, Poland, Slovakia and Slovenia – from systemic change in 1989 to 2019 to explain the reasons of the collapse of ECE democratic systems in the 2010s.

Attila Ágh demonstrates the key turning point in 2010, when the region’s political trajectory shifted from chaotic democracy to authoritarian rule. Moving beyond the narrow spectrum of political ‘event history’ deployed by ECE parties and governments, the author offers a complex analysis of the changes to the region, exploring the deep, systemic causes of hard populism. Examining the fascinating relationship between ECE countries, Europe and the world, Ágh outlines the future of democracy in the region, exploring perspectives of re-democratization by the new generation raised under the auspices of EU democracy.

Declining Democracy in East-Central Europe provides researchers in both political and European studies with a unique insight into the rapidly diverging pathways of European democracies. Ágh’s detailed approach to the ECE region will also benefit experts in regional studies, moving beyond political narratives of individual countries and analysing the region as a whole.

Critical Acclaim
‘This book is a well-written, thorough analysis of the political and social landscape of ECE since the collapse of communism. It offers a convincing explanation of the dynamics that have led to the emergence of authoritarian populist governments in ECE and will be of interest to anybody who wants to understand the reasons behind the current divergence of Eastern and Central Europe from Western Europe.’
– Zerrin Torun, Europe-Asia Studies

‘Attila Ágh’s book investigates the largely neglected domestic developments in the East-Central member states since the fall of the iron curtain and their subsequent accession to the European Union. Ágh’s analysis is comprehensive, well-informed and illustrates how a mixture between external conditionalities and domestic developments, predominantly a persistent systemic distrust and lack of deep-seated Europeanisation have contributed towards the rise of neopopulism in the region. Ágh warns of the "a decline in all respects of democracy, governance and sustainability as a complex deficit" as part of a general trend of democratic backsliding in the ECE region. Ágh’s analysis is a crucial and overdue contribution to the academic and public debate on the future of the EU beyond the current narrow focus on Brexit and the revival of the Franco-German partnership. He illustrates that the biggest risk for the survival of the European project post-Brexit lies in the manifestation of East-Central Europe as a ‘blind spot’, a warning which should be a wake-up call to Western political elites.’
– Christian Schweiger, Chemnitz University of Technology, Germany

Contents
Contents: Introduction Part I Democratization and Europeanization in the Old World Order 1. Systemic change in the Old World Order 2. Socio-economic transition and the social disintegration 3. Political transition and the crisis of representative democracy Part II The Collapse of ECE democracies in the New World Order 4. The New World Order and the desecuritization process in ECE 5. The failure of catching up and the credibility crisis in ECE 6. The rise of hard populism and the collapse of democracy in ECE 7. The ECE political system: velvet dictatorship with façade democracy 8. ECE regional politics and the increasing Core-Periphery Divide 9. The civilizational crisis in the ECE region Postscript Index