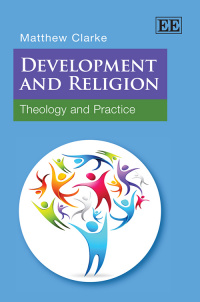 Religious belief is a common human characteristic with eighty percent of the world’s population professing religious faith. Observable in all societies, religious belief is pervasive, profound, persuasive and persistent. The premise of this book is that despite this, religion has long been ignored within mainstream development paradigms and by development practitioners (both locally and at the international level) resulting in sub-optimal development outcomes. Matthew Clarke argues that each religion offers useful insights into various issues concerning development that should be considered by donors, NGOs, and others seeking to improve the lives of the poor.

Undergraduate and postgraduate students of development studies, religious studies and theology will gratefully welcome this highly regarded book.
Critical Acclaim
‘This is a book I have been waiting for. . . While religion may still reside outside the mainstream of development thinking, this book makes an important and significant contribution to addressing this weakness. It enables the reader to engage in this complex field with much greater understanding and insight.’
– Rick James, Development in Practice
Contents
Contents: Foreword by Katherine Marshall Preface 1. The Religion–Development Nexus 2. Hinduism: Dharma and Active Citizenship 3. Buddhism: A Middle Way for Development 4. Judaism: A Cry for Justice 5. Christianity: Development as an Option for the Poor 6. Islam: Equality and Action 7. Conclusion References Index
Add to Wish List
eBook for individuals
978 0 85793 073 6
From $40.00
Click here for options
eBook for library purchase
978 0 85793 073 6
View sample chapter and check access on: