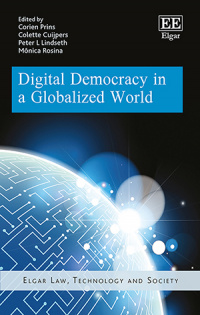 Digital Democracy in a Globalized World

9781785363955 Edward Elgar Publishing
Elgar Law, Technology and Society series
Edited by Corien Prins, Chair, Netherlands Scientific Council for Government Policy (WRR) and Professor of Law and Informatisation, Tilburg Institute for Law, Technology and Society, Colette Cuijpers, Associate Professor, Tilburg Institute for Law, Technology and Society and Program Director, international Master's program in Law and Technology, Tilburg Law School, the Netherlands, Peter L. Lindseth, Olimpiad S. Ioffe Professor of International and Comparative Law, University of Connecticut, US and Mônica Rosina, Full Professor, Fundação Getulio Vargas Law School, São Paulo, Brazil
Publication Date: 2017 ISBN: 978 1 78536 395 5 Extent: 392 pp
Whether within or beyond the confines of the state, digitalization continues to transform politics, society and democracy. Information and Communication Technologies (ICTs) have already considerably affected political systems and structures, and no doubt they will continue to do so in the future. Adopting an international and comparative perspective, Digital Democracy in a Globalized World examines the impact of digitialization on democratic political life. It offers theoretical analyses as well as case studies to help readers appreciate the changing nature of democracy in the digital age.

More Information
Contributors
Contents
More Information
The transformative impacts of digitalization on society are visible both within nation states and across borders. Information and communication technologies are typically considered beneficial for democracy. Nevertheless, this book explores the challenges that technology brings to democracy, and in so doing advances our understanding of this crucial digital, social and political phenomenon. It contributes to the broader discussion of the relationship between international, national and sub-national norms, institutions and actors in an increasingly connected world.

Insightful and current, this book offers a wide variety of perspectives in an area where there is still not yet an extensive body of research. It considers, for example: the extent to which new forms of digital political engagement change traditional democratic decision-making; how receptive national governments and authorities are to digital democratic movements; how governments can uphold the values of democratic society while also ensuring flexibility with regard to the private sector; and how we should judge these developments in light of the cross-border effects of digitalization.

Understanding the influence of digitalization on democracy is crucial. As such, this book will appeal to a broad audience including, but not limited to, social scientists, policy makers, legal researchers, NGOs, governments, students and lawyers.

1. Digitalization through the lens of law and democracy
Maurice Adams and Corien Prins

3. In search of the Holy Grail: a principled approach to multistakeholder governance in internet policy-making
Nicolo Zingales, Roxana Radu

4. The broken promises of democracy in the information era
Ugo Pagallo

6. The ambivalence of the impact of digitalization on democracy through the lens of privacy and transparency
Colette Cuijpers

13. Digital democracy in Belgium and the Netherlands. A socio-legal analysis of technologies, embedding and expectations of two Fourth Wave innovations
Koen van Aeken