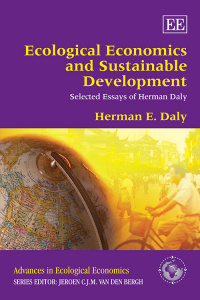 This book seeks to identify the blind spots and errors in standard growth economics, alongside the corrections that ecological economics offers to better guide us toward a sustainable economy – one with deeper biophysical and ethical roots.

Under the general heading of sustainability and ecological economics, many specific topics are here brought into relation with each other. These include: limits to growth; full-world versus empty-world economics; uneconomic growth; definitions of sustainability; peak oil; steady-state economics; allocation versus distribution versus scale issues; non-enclosure of rival goods and enclosure of non-rival goods; production functions and the laws of thermodynamics; OPEC and Kyoto; involuntary resettlement and development; resource versus value-added taxation; globalization versus internationalization; immigration; climate change; and the philosophical presuppositions of policy, including the policies suggested in connection with the topics above.

This fascinating work will appeal to scholars and academics of ecological, environmental, development, and environmental resource economics and studies.
Critical Acclaim
‘This clear-thinking collection brings together 25 of Daly’s essays, speeches, reviews and testimonials from the past decade. . . as a whole they provide a useful masterclass on the principles of ecological economics. Daly’s vision, as well as his frustration with mainstream economists’ refusal to engage with his arguments, comes through loud and clear.’
– New Scientist

‘It’s hard to imagine ecological economics without the numerous and profound contributions of Herman Daly. These papers reveal the consistency of his analysis and clarity of exposition that have made him one of the most influential economists of his generation. Because of Herman Daly we have a much better understanding of how economies relate to the environment, why so much is wrong with this relationship and what must be done to fix it.’
– Peter Victor, York University, Canada

‘This thrilling compilation outlines the origins of the young discipline of ecological economics by the intellectual leader of the movement, Herman Daly. He recounts how, as a member of the recently demoted environment department at the World Bank, he integrated ecology with economics during his six years in the bowels of the beast. Herman lucidly and compellingly combines common sense with profound understanding of both economics and ecology to arrive at sustainable solutions to the global problematique. Herman’s rigorous yet compassionate solutions to climate change, peak oil, globalization vs. internationalization, poverty reduction, and the unsung concept of scale leading to uneconomic growth, are precisely what we need to prevent the current liquidation of our beautiful world. This book will galvanize you into the action we need so much.’
– Robert Goodland, Environmental adviser, World Bank Group, 1978–2001

‘In this book, written in crystal clear style, Herman Daly reiterates the main points of his analysis and vision, he praises some teachers (John Ruskin, Frederick Soddy, Nicholas Georgescu-Roegen, Kenneth Boulding), he fearlessly attacks some adversaries in the World Bank and MIT, and he offers some advice to the government of his own country, to the Russian Duma, and especially to OPEC that, if followed, would change the world very much for the better. Finally, on a different line of thought, he interrogates conservation biologists on their reasons for wanting to keep biodiversity since, as biologists, they claim that evolution has no particular purpose. Why not let the Sixth Great Extinction run its course? In other words, science cannot provide an ethics of conservation, which Herman Daly finds in religion more than in democratization deliberations.’
– Joan Martinez-Alier, Universitat Autonòma de Barcelona, Spain
Contents
Contents:

PART I: BASIC CONCEPTS AND IDEAS
1. Limits to Growth

2. Economics in a Full World

3. The Challenge of Ecological Economics: Historical Context and Some Specific Issues

6. Can We Grow Our Way to an Environmentally Sustainable World?

8. Ecological Economics: The Concept of Scale and its Relation to Allocation, Distribution, and Uneconomic Growth

9. Sustaining Our Commonwealth of Nature and Knowledge

10. The Steady-State Economy and Peak Oil

11. How Long Can Neoclassical Economists Ignore the Contributions of Georgescu-Roegen?

PART IV: TESTIMONY AND OPINION
12. Off-Shoring in the Context of Globalization

19. The Return of Lauderdale’s Paradox