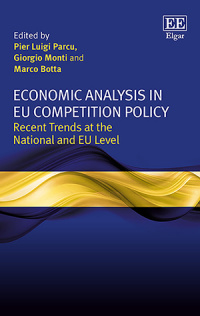 Recent Trends at the National and EU Level

More Information
Critical Acclaim
Contributors
Contents
More Information
This insightful book assesses emerging trends in the role of economic analysis in EU competition policy, exploring how it has substantially increased in terms of both theories and methods.

Expert contributors examine the jurisprudence of the EU Court of Justice, which has become more supportive of effect-based analysis in EU competition policy. Chapters consider key topics including the role of economic analysis in relation to defining the relevant market, the challenges of competition policy enforcement in the telecom and digital markets, and economic methods to estimate damages in cases of private enforcement of EU competition law. The book also discusses the challenges faced by judges in reviewing the economic evidence relied on by competition agencies in their decisions and how these may be overcome.