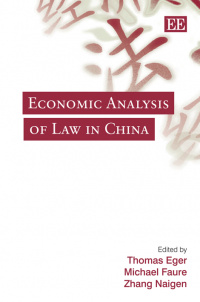 Economic Analysis of Law in China

More Information
Critical Acclaim
Contributors
Contents
More Information
This book comprises contributions on recent developments in China from a law and economics perspective. For the first time Chinese and European scholars jointly discuss some important attributes of China’s legal and economic system, and some recent problems, from this particular viewpoint.

The authors apply an economic analysis of law not only to general characteristics of China’s social order, such as the specific type of federal competition, the efficiency of taxation and regulation, and the importance of informal institutions (Guanxi), but also to distinct areas of Chinese law such as competition policy, professional regulation, corporate governance and capital markets, oil pollution, intellectual property rights and internet games. The contributors discuss to what extent the law and economic models that have so far been employed within the context of developed countries can be applied to a country like China as well. The European scholars use law and economics in order to determine what China could learn from the European experience. The Chinese scholars discuss whether law and economics can be of any use in analysing the particular features of the Chinese legal system today.

Economic Analysis of Law in China will appeal to lawyers, economists and social scientists in China interested in developing legal institutions with an eye on economic efficiency. Scholars generally interested in the economic analysis of law, as well as in the comparison and transition of economic systems, will also find much in this book that will be of interest to them.
Critical Acclaim
‘This book is an exemplary multi-disciplinary and multi-institutional study of contemporary Chinese law. A collective effort by a group of European and Chinese scholars, it skillfully tests the relationships between law and economics in the Chinese context.’
– The China Journal

‘This is an extremely valuable collection of essays on modern Chinese law viewed through the lens of the law and economics movement. China is developing very rapidly and law is now understood to provide the essential framework for economic development – provided the law itself is economically rational. The essays in this volume are excellent examples of how economics can be used to clarify and guide the law applicable to the essential dimensions of the economy. I recommend it wholeheartedly and without reservations.’
– Richard A. Posner, United States Court of Appeals for the Seventh Circuit and University of Chicago Law School, US

‘This book brings together important applications of law and economics to China and covers a wide range of issues, including such basic concerns as property rights, intellectual property, and taxation, as well as competition law and corporate and securities law. Because of its breadth of coverage, its focus on the particulars of Chinese law, and the expertise of its scholars – both Western and Chinese – it should serve as a valuable reference work for years to come.’
– Steven Shavell, Harvard Law School, US

‘This book is an important step toward a Chinese scholarship in law and economics, written by leading law and economics researchers from China and Europe.’
– Hans-Bernd Schaefer, Universität Hamburg, Germany

‘In China everything is different, you cannot apply ordinary economics and the legal framework is idiosyncratic. In the course of time, such statements turned out to be prejudices, and the Eger/ Faure/ Zhang volume makes perfectly clear that, for instance, a law and economics approach can shed new light into the intricacies and complexities of Chinese institutional arrangements. Indeed, China creates new puzzles for economic and legal analysis. On the other hand, however, the Chinese need not invent the wheel anew – and they do not try it. The book shows instances where a sophisticated law and economics approach can help to develop the legal framework which is appropriate for the transition from a planned into a market economy. The Chinese economic system is not (yet) a normal capitalist market economy, neither is the legal system adapted to a normal private property economy. Nevertheless the chapters of the book apply fruitfully law and economics theories and thus prove their general applicability. One of the outstanding achievements of the volume can be seen in the fact that it recruited more than half of its contributors with a Chinese background. They learn eagerly western approaches and they learn fast. And, of course, they have no problems with understanding Chinese culture and society. So the book combines most profitably the look from the outside and the look from within with a common theoretical framework.’
– Hans-Jürgen Wagener, Europa Universität Viadrina, Germany
Contributors
Contributors: J. Du, T. Eger, M. Faure, P. Garello, Q.-Y. Jiang, Y. Jing, A. Kamperman Sanders, Y.L. Liu, A.I. Ogus, N.J. Philipsen, M. Schüller, R. Van den Bergh, H. Wang, J. Wei, S.M.L. Wong, S. Xue, J. Zhang, N. Zhang
Contents
Contents:

PART I: BASIC FEATURES OF THE CHINESE ECONOMIC SYSTEM
1. A Comparison of Chinese and European-Style Federalism from a Law and Economics Perspective
Thomas Eger and Margot Schüller
2. The Road to Efficient Taxation in China
Pierre Garello
3. Legal Pluralism in the Governance of Transitional China
Jianwei Zhang and Yijia Jing
PART II: SPECIFIC ASPECTS OF THE CHINESE LEGAL SYSTEM FROM AN ECONOMIC PERSPECTIVE
4. The Economics of Competition Policy and the Draft of the Chinese
Competition Law
Roger Van den Bergh
5. The Law and Economics of Professional Regulation: What Does the Theory Teach China?
Niels J. Philipsen
6. Regulatory Arrangements and Incentives for Opportunistic Behaviour
Anthony I. Ogus