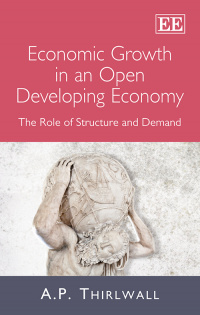 The Role of Structure and Demand

More Information
Critical Acclaim
Contents
More Information
This concise yet insightful sequel to the highly acclaimed The Nature of Economic Growth provides a comprehensive critique of both old and new growth theory, highlighting the importance of economic growth for reducing poverty.

A.P. Thirlwall illustrates that orthodox growth theory continues to work with ‘one-good’ models and to treat factor supplies as exogenously given, independent of demand. Orthodox trade theory still ignores the balance of payments consequences of different patterns of trade specialisation when assessing the welfare effects of trade. The author goes on to present theory underpinned by up-to-date empirical evidence that factors of production and productivity growth are endogenous to demand, and that the structure of production and trade matter for the long-run growth performance of countries because of their impact on the balance of payments. He concludes that trade liberalisation has proved disappointing in improving the trade-off between growth and the balance of payments.

This book will provide a challenging read for students and academics in the fields of economics, heterodox economics, and development. Policymakers focussing on the relationship between growth, trade and the balance of payments will also find the book to be of great interest.
Critical Acclaim
‘The book is very well written and offers a host of theoretical and empirical insights into the problems at hand. It contains the fruits of the lifelong studies of a major development economist and is a must for everyone working in the field under consideration. Tony Thirlwall is to be congratulated for opening the reader’s eyes and freeing him from the fetters of ideology and prejudice.’
– Heinz D. Kurz, Applied Economics Journal

‘Economic Growth in an Open Developing Economy is revealed as a tour de force. It would serve equally well as either an introductory primer on balance-of-payments-constrained growth theory, or as a summary of the current state of the art for those already acquainted with the field. As such, it deserves to be read by all students and professionals with a sincere interest in long run growth and development.’
– Review of Keynesian Economics

Contents
Contents: Preface 1. Divisions in the World Economy and the Importance of Economic Growth 2. Growth Theory: Old and ‘New’ 3. A Critique of Orthodox Growth Theory: Structure and Demand Matter for Economic Growth 4. The Endogeneity of the Natural Rate of Growth and Constraints on Demand 5. Balance of Payments Constrained Growth 6. Trade Liberalisation, the Balance of Payments, Growth, Inequality and Poverty References Index
Add to Wish List
eBook for individuals
978 1 78195 533 8
From $31.16
Click here for options
eBook for library purchase
978 1 78195 533 8
View sample chapter and check access on: