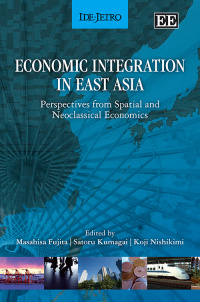 Perspectives from Spatial and Neoclassical Economics

More Information
Contributors
Contents
More Information
Increasing numbers of free trade and economic partnership agreements have been concluded among many countries in East Asia, and economic integration has progressed rapidly on both a de facto and de jure basis. However, as the authors of this book argue, integration may intensify regional inequalities in East Asia and so this process has attracted much attention of late. Will it actually succeed in achieving greater economic growth or will it in fact cause growing regional disparity? This book presents a clear picture of East Asian integration, focusing on various aspects including:

• the structure of intra-regional trade
• industrial location patterns – especially of multinational enterprises
• the formation of industrial agglomeration
• the development of political and institutional frameworks for integration.

Economic Integration in East Asia addresses these issues from the perspectives of both spatial and neoclassical economics. As the book highlights, if the regional disparities continue to grow, this may constitute a fatal obstacle to deepening integration and the growth potential of East Asia.

5. Evolution of Institutions and Policies for Economic Integration in East Asia: History and Prospects
Yoshihiro Otsuji and Kunihiko Shinoda