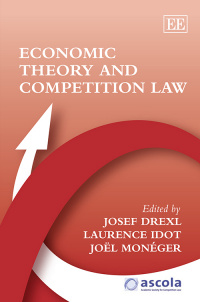 More Information
Critical Acclaim
Contributors
Contents
More Information
The context for this book is the increasingly complex relationship between economic theory and competition law which gives rise to lively political and academic debate on the direction competition law should take in a more global and innovation-oriented market place.

The authors adopt a comparative, research-orientated approach, taking into account different situations in the US, Europe, Japan and transition and developing countries. They investigate the impact of economics on the objectives of competition law in various fields – restrictive agreements, unilateral restraints and merger control – and on the effectiveness of enforcement in a given legal and judicial system.

Economic Theory and Competition Law is an insightful resource for law and economics scholars. Legal practitioners in the field of competition law will also value this book.
Critical Acclaim
‘Economic Theory and Competition Law constitutes a timely, stimulating contribution to the ongoing debate on the current trends of competition enforcement, not only in Europe but also in other jurisdictions, and especially on the impact that applying the concepts and the categories of economic theory is going to have on this activity. . . Due to its coverage and timeliness, it is very likely to have a considerable impact on the current discussion and also to be of interest to both academics and practitioners active in the field of competition law and policy.’
– Arianna Andreangeli, Common Market Law Review
Contributors
Contributors: M. Chagny, T. Eilmansberger, H.W. Friederiszick, M.-A. Frison-Roche, M.S. Gal, D.J. Gerber, T.L. Greaney, S. Hayashi, W. Kerber, B. Lasserre, A. Louvaris, G. Parr, A. Perrot, H. Schweitzer, L. Tichý, R. Zäch, D. Zimmer
Contents
Contents:

4. Efficiency of Competition Law in Economies of Transition

PART II: THE STATUS OF EFFICIENCY ANALYSIS IN COMPETITION LAW
6. Should Competition Law Promote Efficiency? Some Reflections of an Economist on the Normative Foundations of Competition Law
Wolfgang Kerber

7. Competition Law Should Promote Economic and Social Welfare by Ensuring the Freedom to Compete – A Lawyer’s View
Roger Zäch

8. Appropriation of the Legal System by Economic Concepts: Should Conflicting Goals be Considered?
Anne Perrot

12. Efficiencies in Merger Analysis: Alchemy in the Age of Empiricism?
Thomas L. Greaney

15. A Brief Overview of Some Conflicts between Economic Efficiency and Effectiveness of the Administrative or Judicial Process in Competition Law
Antoine Louvaris