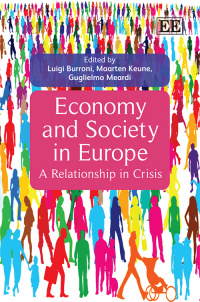 Economy and Society in Europe

A Relationship in Crisis

9781849803656 Edward Elgar Publishing
Edited by Luigi Burroni, Associate Professor of Economic Sociology, University of Teramo, Italy, Maarten Keune, Professor of Social Security and Labour Relations, AIAS-HSI, University of Amsterdam, the Netherlands and Guglielmo Meardi, Dipartimento di Scienze Politico-Sociali, Scuola Normale Superiore, Italy
Publication Date: 2012 ISBN: 978 1 84980 365 6 Extent: 256 pp
While an economy is always ‘embedded’ in society, the relationship between the two is undergoing profound changes in Europe, resulting in widespread instability which is emphasised by the current crisis. This book analyses these changes, and in particular pressures of intensifying international competition, globalization and financialization within Europe.

More Information
Critical Acclaim
Contributors
Contents
More Information
While an economy is always ‘embedded’ in society, the relationship between the two is undergoing profound changes in Europe, resulting in widespread instability which is emphasised by the current crisis. This book analyses these changes, and in particular pressures of intensifying international competition, globalization and financialization within Europe.

Combining the perspectives of economic sociology, political economy and political science, the expert contributors offer an in-depth, multidisciplinary insight to the functioning of a number of institutional arenas around which European economies and societies are organized. Areas explored include the state and public policy at European national and regional level, the welfare state, industrial relations systems, education systems and the family.

This challenging and thought provoking book will be of great interest to a wide-ranging audience across a number of disciplines, including European studies, political science, comparative political economy, economic sociology, industrial relations and social policy.
Critical Acclaim
‘This volume is a welcome contribution from economic-sociological perspectives to debates on capitalist diversity that have been so prevalent over the past fifteen years. . . the volume is well organised. . . this volume does a better job than most in the field in seeking to address contemporary debates and issues.’
– Ian Bruff, Journal of Contemporary European Studies

‘Drawing on the development of economic sociology over the past 40 years, this book brings together leading scholars to explore the relationship between social institutions on economic processes. Inspired in particular by the innovative and creative dimensions of Colin Crouch’s work, they signpost directions for future research. It will be an important reader for international scholars exploring the unfolding dimensions of contemporary relations in economy and society.’
– Jacqueline O’Reilly, University of Brighton Business School, UK

‘Improving our understanding of how economy and society interrelate in Europe is of paramount importance. The rigorous and thought-provoking analyses about the interaction between markets and the institutions of society contained in this book undoubtedly represent an excellent example of how this improvement can be achieved, especially in these times of crisis.’
– Andrés Rodríguez-Pose, London School of Economics, UK

‘This book offers a refreshing account of the deep changes occurring over recent years in the relationship between economy and society in Europe. This is of course a classical theme since Max Weber’s work, but the social institutions which shape economic performance have profoundly evolved, as have the analytical categories used to understand them. The contributions in this volume provide a broad and interesting perspective, dealing with issues as varied as industrial relations, welfare regimes, families and the labour market, universities, local governance and many others. In the wake of the financial crisis, the major theories on the role of such institutions are found partly unsatisfactory, as the boundaries between economy and society are constantly shifting. Everyone interested in improving our analytical tools to understand the direction of change in Europe should welcome this book.’
– Marino Regini, University of Milan, Italy
Contributors
Contributors: L. Burroni, R. Erne, H. Farrell, U. Glassmann, A. Hemerijck, S. Jong, M. José González López, T. Jurado-Guerrero, M. Keune, P. Le Galès, G. Meardi, M. Naldini
Contents
Contents:

8. States in Transition, Research About the State in Flux
Patrick Le Galès

10. The Boundaries between Economy and Society in European Cities
Luigi Burroni

11. Social Institutions Among Economists in the Wake of the Financial Crisis
Henry Farrell

Social Contracts and Informal Workers in the Global South