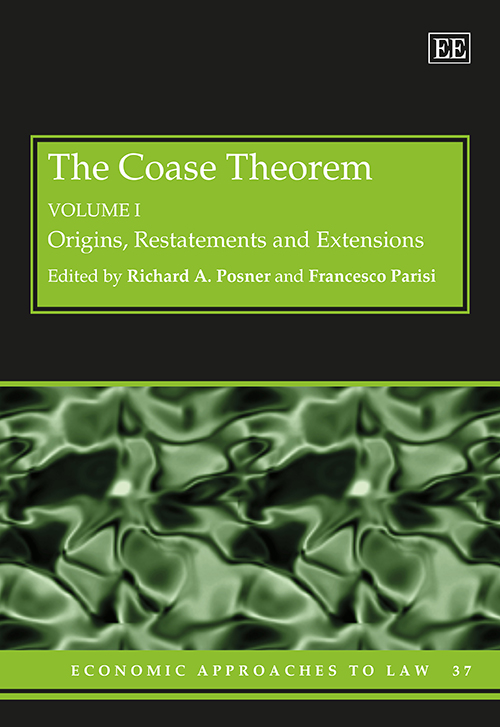 This two-volume collection provides an overview of essential works for understanding one of the most important contributions to the field of law and economics: the Coase Theorem. A variety of prominent scholars contribute crucial essays, each exploring different aspects of Coase’s work. Volume I explores the origins, restatements and extensions of Coase’s Theorem and contains subsections on sources, positive restatements, normative corollaries, ‘Coaseanism’, and Coase’s intellectual legacy. Volume II considers criticisms and applications of the Coase Theorem covering surveys and applications, Coasean Bargaining, Coase and the Constitution, political markets, liability, critiques, and experimental testing of the Theorem.

‘For those eager to learn more about the phenomenon that is the Coase theorem, this collection makes an excellent resources, one that exposes the reader to both the grand themes of Coase theorem history and the theoretical minutia that all too often dominated the discussion - but without going overboard on the latter front.'
– Steve G. Medema, Journal of the History of Economic Thought

‘Deirdre McCloskey’s erstwhile quip that no more than a handful of economists, “a bare half-dozen,” actually understand the Coase Theorem, was surely an exaggeration – the actual number is undoubtedly fewer! Once assimilated, however, the Theorem – particularly its contrapositive: Institutions and legal rules matter only as a consequence of nontrivial transaction costs – fundamentally reorients one’s analytical approach to problems of organization and governance. The contributions assembled in these volumes, which span the Theorem’s origins, development, applications and misunderstandings, provide the careful reader with the opportunity to join that elite group who truly appreciate Ronald Coase’s profound insight.’
– Scott E. Masten, University of Michigan, US