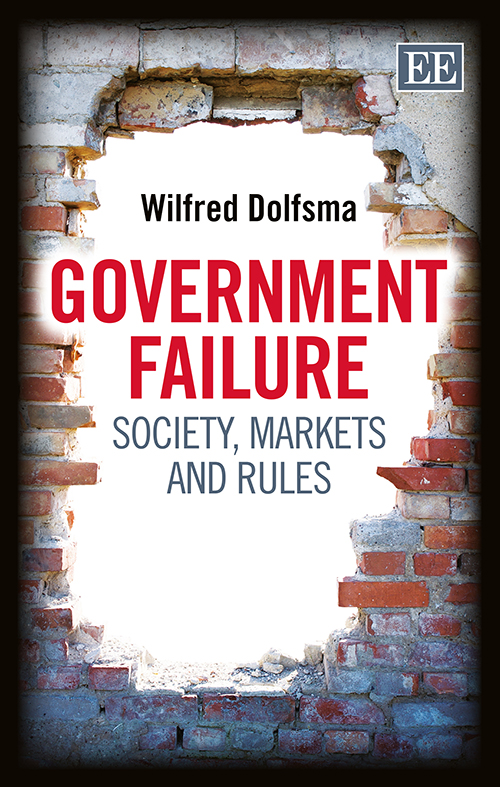 This highly unique book takes a fundamental look at when and how a government can fail at its core responsibility of formulating rules. Government, representing society, relates to the economy by formulating the rules within which (market) players should operate. Although market and business failure are much discussed in the economics literature, government failure is often overlooked. This book addresses this gap, exploring in detail what constitutes government failure.

‘Starting from the idea that market and state are intertwined domains, and explaining the economy as a system of communication evolving through innovation, this excellent book makes a valuable contribution to understanding government rule setting in knowledge-based economies. It provides a taxonomy of ways in which government rules function more or less successfully, and addresses the important problem of institutional vulnerability. Intellectual property rights laws and reform of health care systems are perceptively discussed. This book is strongly recommended for public policy experts and researchers investigating the public–private economy.’
– John Davis, Marquette University, US and University of Amsterdam, the Netherlands

‘Since the 1970s the conventional wisdom has been that governments should retreat from the economic sphere and enhance the role of markets. The financial crash of 2008 has brought that into question. This stimulating set of essays considers the role of government in modern complex economies. Addressing the potential for both government failure and market failure, and drawing on empirical evidence, these studies are important contributions to a revived debate.’
– Geoffrey M. Hodgson, University of Hertfordshire, UK

‘The idea that governments as well as markets can fail has been central to the public choice literature for the last half century. Typically government failure is described and measured as excessive expenditures or unbalanced budgets. This original book points out that government failures often take the form of inappropriate or inconsistent rules governing the private sector. The argument is nicely illustrated using real-world examples in the areas of healthcare, innovation, and intellectual property. The book is a timely and important contribution to the literature.’
– Dennis C. Mueller, University of Vienna, Austria