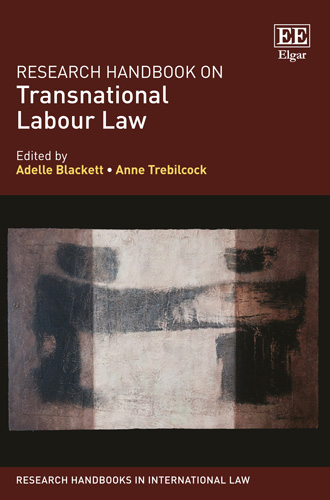 The editors’ substantive introduction and the specially commissioned chapters in the Handbook explore the emergence of transnational labour law as a field, along with its contested contours. The expansion of traditional legal methods, such as treaties, is juxtaposed with the proliferation of contemporary alternatives such as indicators, framework agreements and consumer-led initiatives. Key international and regional institutions are studied for their coverage of such classic topics as freedom of association, equality, and sectoral labour standard-setting, as well as for the space they provide for dialogue. The volume underscores transnational labour law’s capacity to build bridges, including on migration, climate change and development.

‘The list of 41 authors of this Handbook reads like a roll-call of the rising generation of scholars of labour law as well as a number of distinguished old hands. This is not a conventional textbook on transnational labour law but a series of short and stimulating essays on important current issues. It provides an invaluable guide for all those who want to think and write about the transnational influences that shape the modern world of work.’
– Sir Bob Hepple QC FBA, University of Cambridge, UK