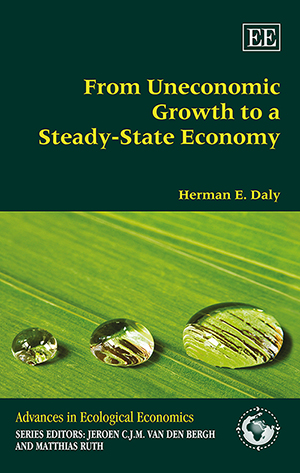 Herman E. Daly, Emeritus Professor, School of Public Policy, University of Maryland, US and Winner of the 2014 Blue Planet prize

In this important book, Herman E. Daly lays bare the weaknesses of growth economics and explains why, in contrast, a steady-state economy is both necessary and desirable. Through the course of the book, Daly develops the basic concept and theory of a steady-state economy from the 1970s limits to growth debates. In doing so, he draws on work from the classical economists, through both conflicts and agreements with neo-classical and Keynesian economists, as well as recent debates on uneconomic growth.

‘From near the beginning of his career, Herman Daly has consistently and ever more effectively argued for a steady-state economy. . . . this recent addition to his list shows that Daly is still going strong. His writing is sage, pugnacious, clear, witty, insightful, critical, even cutting, and yet always with a deep care for people and the planet. . . . an excellent collection of essays covering the history of his efforts and an excellent set of shorter entries on particular issues written over the past few years. Personally, I never tire of reading Herman Daly and so enthusiastically recommend this book. The combination of material in short and longer essays could make it an ideal book to accompany an upper division course on sustainable development, ecological economics, or a course that strives to cover the variety of ways heterodox economists think.’
– Richard B. Norgaard, Journal of Regional Science

‘Herman Daly is widely recognized as being the most accomplished thinker on the growth-versus-environment nexus. In this collection of essays, he discusses recent facts and arguments, fluently combining fundamental, applied and topical issues, as well as responding to green growth optimists like Paul Krugman. Acknowledging the precise and captivating style of Daly's writing, here is an excellent book for students of both economics and environmental science to start reading about environmental economics and growth. Daly gives his proposed alternative, the steady-state economy, hands and feet by elaborating a diversity of economic topics, including jobless growth, nationalizing money, regulating housing markets, facing the economic crisis and limiting free trade.’
– Jeroen C.J.M. van den Bergh, University of Barcelona, Spain and Free University, Amsterdam, the Netherlands